Goldman Sachs published the research paper ‘The Future of Finance’ analysing the potential impact of alternative finance companies, especially p2p lending marketplaces, on the US banking sector.
Goldman Sachs states ‘We see the largest risk of disintermediation by non-traditional players in: 1) consumer lending, 2) small business lending, 3) leveraged lending (i.e., loans to non-investment grade businesses), 4) mortgage banking (both origination and servicing), 5) commercial real estate and 6) student lending. In all, [US] banks earned ~$150bn in 2014, and we estimate $11bn+ (7%) of annual profit could be at risk from non-bank disintermediation over the next 5+ years.‘ 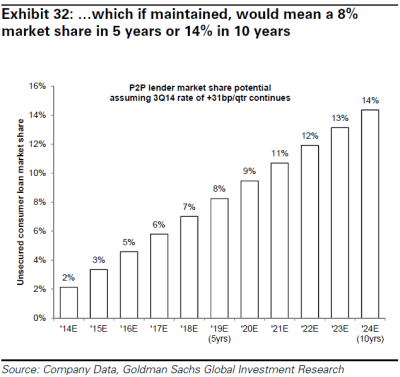 The study estimates that in the most affected area – unsecured personal lending – the disruptors, led by Lending Club and Prosper, already had a 1.8% US market share at the end of Q3 2014. Assuming that growth continues, then p2p lenders will reach 8% US market share in 5 years.

Regarding the reaction of incumbents and sustainability, Goldman Sachs finds: ‘Emerging players will force the incumbents to change competitive behavior. For instance, we would expect pricing of
products to adjust, driving potentially lower returns. Second, some could be forced to acquire, which would likely cannibalize the existing business. This opens the debate whether you are better to cannibalize yourself at the expense of your current business model or remain under attack. Lastly, incumbents could pursue new regulations …‘.

The Harmoney Story
Between the Towers in March