2007 was a year of launch and growth for most players. What trends in peer to peer lending can be expected in 2008?

More competition and entering more national markets (probability 100%)
In many markets multiple p2p lending services will compete for the attention of lenders and borrowers, especially in the largest market: In the United States Globefunder.com and Loanio.com will launch. In other markets, where there is no national p2p lending service established yet (e.g. Canada, New Zealand, Spain), p2p lending will be introduced by the launch of a service.

Insurance against defaults (probability 75%)
Not totally new, since Boober.nl and Smava.de already offer some protection of the loan principal. Insurance can be implemented as a classical insurance product (supplied by an insurance company) or as a market mechanism, spreading the risk over multiple loans.

Secondary market (probability 25%)
One of the disadvantages for lenders currently is that on all p2p lending platforms, the invested money i locked in for the duration of the loan term. Prosper.com has allready announced that it plans a secondary market, enabling lenders to sell and buy loans any time. Depending on the market there are huge regulatory hurdles to allow trading of loans. For example German executives told P2P-Banking.com that on the German market a secondary market is unlikely for years to come.

Cross-market lending (probability <25%)
Aside form the social lending approaches (Kiva, MyC4, Microplace) so far all service are open only for lenders and borrowers that live in the same market. If lenders could lend to borrowers in markets with higher key interest rate than the market the lender lives in, the advantages could outweight the risks. In the European Union due to the Euro zone there would be no currency exchange risk. Again there are steep regulatory hurdles to be taken.

Third party bidding management (probability?)
Just a thought. Lenders could allow a third party to manage their portfolio. Like an investment funds the lender would invest an amount of money, while the funds manager does the actual selection of loans. This could possibly be done by a sophisticated software (would you trust this?) selecting loans by statistical analysis of performance of loans with similiar parameters or by a fonds manager. The later is unlikely because the amount of time needed for each loan is too high to be covered by fees.

I'll check at the end of 2008 to see how these trends developed.

More and more p2p lending services are launching, each catering to different markets and different target audiences. Some derive more features from "ancestors" Prosper or Zopa, some less.

All follow the aim to allow lenders to directly lend money to borrowers without a bank acting as intermediary. This aim is sometimes not pursued strictly to the point. Smava actually partnered with a bank to comply with regulation, Zopa US partnered with credit unions, but nevertheless it serves as comprehensive definition.

I think the last factor is most useful for the definition of categories. It affects all parts of the service from marketing to operations. The differentiation is in the objective the majority of the lenders had when selecting the platform. Were they attracted by the motivation to help an individual through a loan or by the motivation to earn interest? END_OF_DOCUMENT_TOKEN_TO_BE_REPLACED

2007 was an exciting and eventful year in the development of peer to peer lending. Looking back these were the highlights:

I will write another article on which trends to expect in p2p lending in 2008.

Technorati is an interesting choice for the campaign (if it runs only there – I did not check). Technorati is mainly used by bloggers and journalists. The ads would therefore target not the individual investor but the multiplier who might write about Microplace.
I noted that the ad display is NOT using geotargeting meaning it is not only shown to US residents but to viewer worldwide (only US residents can use Microplace at the moment).

(Sample screenshot after search for globefunder)

(Another sample ad, original is larger and flash animated)

The Mission of Microplace is:

MicroPlace’s mission is to help alleviate global poverty by enabling everyday people to make investments in the world’s working poor.

Our idea is simple.

Microfinance institutions around the world have discovered an effective way to help the world’s working poor lift themselves out of poverty. These organizations need capital to expand and reach more of the working poor. At the same time, millions of everyday people here in the United States are looking for ways to make investments that yield a financial return while making a positive impact on the world. MicroPlace simply connects investors with microfinance institutions looking for funds.

The result: more microfinance in the world, satisfied investors, and above all, fewer people living in poverty.

It is not direct peer to peer lending, since lenders choose a country and an 'investment', thereby defining the purpose for which the invested money is used. Refer to this page for a good overview on how the Microplace concept works.

Lenders (termed investors) can invest via Paypal (no paypal fees). Their money goes to the selected microfinance institution (MFI). The MFI uses the money on the purpose described.
The investor buys a security issued by a security issuer. Currently investment offers have terms of 2 to 3 years with interest rates between 1 and 3 percent. Each investment offer (example) is described in detail by a prospectus.

Only U.S. residents are eligible to become investors. Minimum investment amount varies by offer (typically 50 US$). 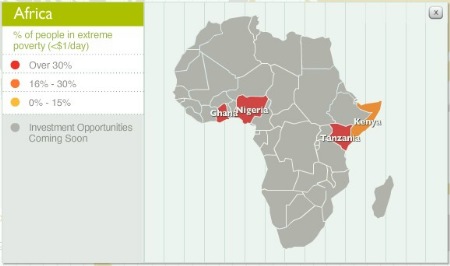