This is a guest post by Tomoyuki Sugiyama, Representative Director of Crowdcredit, Inc (full bio at the end of the article).

Advent of P2P lending in Japan

From regulatory perspective, any legal entity (person or company) which lends money in Japan must make registration under Money Lending Business Act, which prevents the P2P lending platform operators to offer a platform which personal investors lend money directly to the borrowers. Hence in Japan, personal investors effectively lend their money to the borrowers through investing in the P2P lending platformsâ€™ businesses which they lend money to the borrowers as the operators of investment funds (Anonymous Partnership Agreements under Japanese commercial law).

Compared to the growth of P2P lending markets in the UK or in USA, Japanese P2P lending market grew moderately â€“ currently the amount of outstanding loans managed by the largest P2P lending platform, maneo, is estimated to be around 60 million dollars. This is assumed due to over-banking in Japan â€“ in Japan, national average loan to deposit ratio of traditional banks is below 70% and the banks lend quite aggressively, which is quite different from the situation in the UK or in USA where the banks are lending less and less in de-leverage process of their balance sheet in post Lehman crisis period. Borrowers in Japan can much more easily access to traditional financial system compared to the borrowers in the UK or in USA and national average lending interest rate of the banks in Japan is currently 0.887%.

As a result, no operator entered into P2P lending market in Japan after SBI Social Lending and there were only three P2P lending platforms in Japan until 2013.

Maneo introduces guaranteed p2p lending in Japan. On the new “G-Loan” the lender does not need to worry any more about defaults. Minimum investment is only 10,000 JPY (approx. 100 US$). The loans are guaranteed by Orix Credit Corporation which entered into a partnership with Maneo.

The downside is that on “G-Loans” the lender only receives 1.5% interest.

The borrower pays a fixed interest rate, which is set depending on his credit grade:

Borrowers now have the option of selecting a standard loan or a G-Loan. Selecting maneo’s standard loan gives borrowers the opportunity to lower their interest expense if sufficient lenders bid on their loans. In contrast, interest rates on G-Loans are fixed at 7.0%, 8.0%, 9.5%, 11.0% and 12.0% depending on the borrower’s credit rating. According to Tadatoshi Senoo, CEO of maneo, “We believe borrowers who select G-Loans will have an easier time attracting funds from lenders thanks to the guaranty by Orix Credit, and that the liquidity of maneo’s online social lending marketplace will increase significantly as a result, making borrowing at maneo even more attractive.”

In my view the choice whether it is a guaranteed loan or not should not be the borrower’s, but only for the lender to choose when bidding.

With an interest rate of only 1.5% the only merit of this model for lenders is that he can not lose money when bidding on a guaranteed loan.

Maneo.jp today launched the first active p2p lending service in Japan. The service connects lenders (aged 20-65) and borrowers (aged 20-60). Maneo verifies the identity, credit grade and the income of potential borrowers (minimum annual income required is approx. 30,000 US$). Borrowers then create a loan listing and set a maximum interest rate. Lenders can bid on the loan through an auction process.

For information about Maneo’s funding see the earlier coverage: “Maneo to introduce p2p lending in Japan” 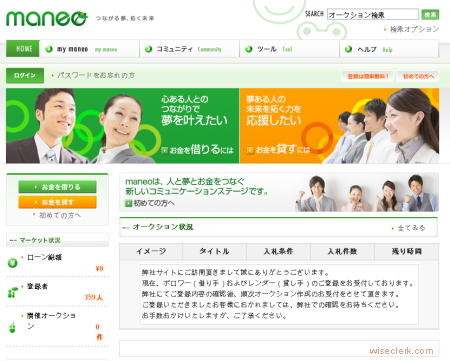 Maneo.jp aims to be the first active p2p lending service in Japan. Their mission statement (from a press release):

maneo Inc. plans to offer a user friendly and highly secure online community for people to borrow and lend money through an online auction system. maneo is about helping people lend and borrow money with each other, sidestepping the expense and inconvenience of traditional banks and consumer finance companies. People who want to borrow money register with maneo and create loan listings. Potential lenders register with maneo and bid on the loan listings they are interested in. maneo aggregates the bids with the lowest rates to fund the relevent loans and handles all of the administrative matters relating to the loans

The company website currently says “Coming in Summer 2008”. Zopa and Prosper also have announced plans for Japan, but no launch date has been set so far. 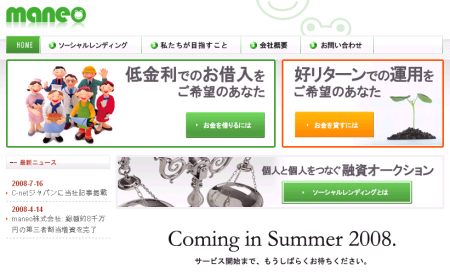