Spanish platform Comunitae has stopped operations indefinitely due to fraud. Several SMEs hat placed fraudulent offers on the marketplaces. The management says this was helped by inside fraud and they have expelled a risk analyst and initiated legal action.

Comunitae was founded in 2008. The problem was detected this October. While no figure of the monetary damage was given, management says the default level caused was to high to continue as investor demand dwindled.

Comunitae is currently showing how the P2P lending model works to the Spanish community. In July, the first 10 loans were granted, among them very different loan purposes such as office refurbishment or wedding expenses. There have been also many cancelled loans mainly due to insufficient lenders or discrepancies in information. The total volume lent in July was 58,500 EUR (approx. 84,000 US$) at an average rate of 10.36%. It seems Comunitae is starting to work with cautious steps.

Currently there are 36 accepted auctions asking for a loan, only one of them is completed, in which there are 61 bids for a 4,000 EUR loan at a 13% maximum rate. .Â In July there has been 50 working auctions for loans as average, 645 people willing to lend money and 780 firm petitions for a loan, 5,033 users have been registered so far. The cautious approach Comunitae is taking, led to rejection of 70% of the borrowers asking for a loan, looking for a default rate of 1%.

Although Comunitae recommends interest rates by ranking borrowers from A to C and maturity with clear rules, lenders decide within a range established by the borrower which is normally higher than recommended by the company. That could show a scarcity of lenders. It seems that this is not a concern to the company – they ask for demanding and selective lenders. Trust is the root of the model and they also developed a groups section where everyone can create or join a group. However one of the groups is sending messages to almost all borrowers to join which could be a spam issue to be dealed by Comunitae or a bad practice to be felt by users and the group to be generally rejected. It seems the group creator wants to advertise his own blog.

Comunitae’s Community Manager MillÃ¡n Berzosa is working hardÂ  to show how the model works with a high response from online media as well as Spanish traditional media with interviews, reports or news on a even weekly basis. Coverage is reported on the corporate blog.

JesÃºs Martin Calvo writes as a guest author for P2P-Banking.com covering p2p lending developments in Spain. He just finished his studies in Law and Business.

Spanish p2p lending service Comunitae.com has now been one months in beta phase.

It has been said before – there might have been no better time to establish p2p lending. With the established system shaken and many consumers not getting loans as easily as before the market environment is good for peer-to-peer lending.

P2P lending gets good media attention. The Uncrunch.org initiative (in which Lending Club takes part) in the Change.org vote for new ideas finished in the Top 15.

On the demand site all p2p lending companies benefit from the crisis. On the supply site, in my opinion the effect is mostly positive too, butÂ  some lenders are hesitant to invest their money in a new, innovative model and rather seek a save haven for it. 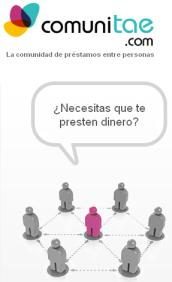 Comunitae gets 2 million Euro funding from Entrinnova to establish itself as a p2p lending service in Spain.

Founded by JosÃ© Miguel Rotaeche and Arturo Cervera, both ex-bankers at BBVA, Comunitae aims to launch in mid 2009. The name is derived from “Comuni” for a group of persons and the spanish abbreviation “TAE” for interest rates.