German credit broker Smava today announced that it has closed a 34 million US$ investment which was led by growth investor Runa Capital, with additional participation from Verdane Capital and mojo.capital. Runa Capital is a venture capital firm with other investments in Zopa, Lendingrobot and Lendio. Verdane Capital is a Scandinavian private equity firm. Existing investors including Earlybird Venture Capital also participated in the investment. This series C round follows the previous round in 2015 which was 16 million US$. In total Smava, which launched in 2007, has raised about 64 million US$ so far.

Smava wants to use the funding to expand the customer base, hire additional talent and continue enhancing our scoring technology according to CEO Alexander ArtopÃ©.

German p2p lending Smava had a high net loss for the year 2011. Documents available to P2P-Banking.com show that Smava incurred a net loss of 2.77 million Euro (approx. 3.68 million US$) in 2011; up from 1.75 million EUR in 2010. Overall loss carried forward up to the end of 2011 was 7.7 million EUR (approx 10.2 million US$). Smava did raise new capital in 2011. They had a cash reserve of 1.98 million EUR in the end of 2011. The high burn rate might have contributed to Smavas decision to change the business model in early 2012 moving away from p2p lending.
No financial figures were available to P2P-Banking.com for later periods.

At German Smava.de the volume of newly originated p2p loans continues to fall and reached a record low ofÂ  approx. 700K Euro in January. That’s only about one-third of the volume Smava funded on its peak-time in mid-2010. Smava changed its business model in spring 2012, since then focusing on brokering bank loans and the aim to rely on the commissions paid by the banks as main source of revenue rather than the p2p lending transaction fees. There are no public figures available on the volume of bank loans brokered by Smava. I do wonder if they will reach break even by pursuing that model as competition in that market is fierce. 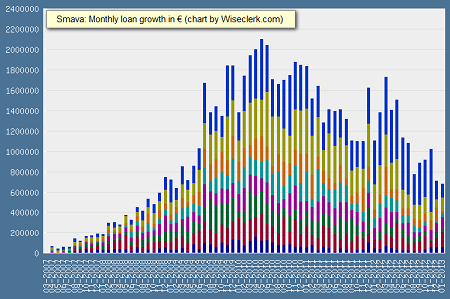 German Smava, launched 2007, yesterday announced that it will offer more products and evolve into a marketplace where borrowers seeking loans get multiple offers. The site logo and layout have been redesigned to reflect this change. Smava said p2p loans will be continued to be on offer and the new products (bank loans) added will give the borrower more choices.

My take on this – what does Smava achieve with this change?

Smava’s new loan volume was static since mid-2010. With the current change Smava:

The question is not if Smava will continue p2p lending (the announcement said they will), but rather if Smava will continue development on that offer. That is unlikely since little happened in the last years. My assumption is that Smava keeps p2p lending on offer mostly for PR and marketing purposes.It allows Smava to position itself as different to loan brokers and loan comparison sites and keep a little of the image of financial innovation attached to the site. END_OF_DOCUMENT_TOKEN_TO_BE_REPLACED

German laws require a banking license to hand out loans. To comply with regulation the two active German p2p lending services partner with a transaction bank, which originates funded loans and then sells the debt claim to the individuals (‘lenders’) that did bid on the loan request on the p2p lending marketplace.
Smava now switched it’s bank partner. Since Smava’s launch in 2007 the bank partner was the biw Bank fÃ¼r Investments und Wertpapiere AG. For all new loans after Dec. 1st, Smava cooperates with the Fidor Bank AG (see earlier coverage on Fidor). Smava feels that Fidor is a great match and praises the integration advantage Fidor offers with its web APIs. The change does not bring any immediate benefits for lenders other than a) unlend money will now earn 0.5% interest p.a. and b) the e-money license of Fidor allows lenders to start lending without verifying identity first – but that’s rather symbolic as it applies only to amounts of up to 500 Euro (and the minimum bid on Smava is 250 Euro) meaning that new lenders could test Smava with up to 2 bids before going through postal identification process.

Smarchive, the fourth startup pitching at German marketplace Seedmatch (see earlier coverage on Seedmatch) raised 100,000 Euro in less than 3 days. The pitch originally was for 50K, but was oversubscribed to the maximum possible amount (100K).

In the UK the market the surrounding conditions for the emerging p2p equity market get better and better. From April 2012 investors in eligible startups will be able to claim 50 percent income tax relief (on a maximum investment of 100,000 GBP per year). The minimum required investment is just 500 GBP per startup. The new law will replace the Enterprise Investment Scheme (EIS) which currently already offers a generous 30% tax break. The British government will also ease some of the restrictions of the current EIS scheme.
The SEIS will bring a huge boost to p2p equity marketplaces in the UK.
Maybe an idea to be copied in other legislations to foster startup foundation?

ThisisMoney has two (1,2) long articles on the failure of Quakle and risks associated for lenders with p2p lending in general. While not wrong, the articles oversimplify some things. And actually there are more risks for lenders then the two mentioned (compare my old article ‘For Debate: A Flaw in Current P2P Lending Models?‘). The author is a strong advocate of the P2P Finance Association: ‘Checking for the association membership is crucial. Itâ€™s a self-governing industry body, so does not carry the same weight as regulation by the Financial Services Authority â€“ something the industry wants but lacks as yet â€“ and is currently the best benchmark for those considering lending.‘. Not a bad advice, but with the association and the market so young, I see that as a bit of limiting, possibly excluding any new entrants that might launch.

This is actually the second start Smava undertakes for European expansion. Smava Poland was merged after a rather short time in operation with another Polish service.

In its press release Smava stresses its successful growth. However in the past year Smava had to deal with a significant decline in new loan volume funded per month.