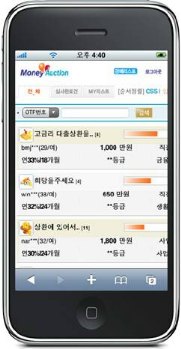 In Korea, p2p lending service Moneyauction became so attractive for lenders that it won a Savings Bank as a lender. A company spokesman told P2P-Banking.com that the bank evaluated the repayment rate of borrowers on the p2p lending site and found it to be better compared to the rate of it’s own existing customer base even though the p2p borrowers credit scores are lower than the credit scores of their customers. Other financial institutions have expressed interest in utilising Moneyauction or entering cooperations.

Moneyauction is advancing in it’s product development. In March it released the new ‘Automatic portfolio lending’ feature as well as support for mobile bidding via smartphones. Lenders can now bid on loans using smart phones like the iPhone (see picture).