Prosper.com applied several changes as described in this announcement. Some of the changes were expected as plans had been known, some were surprises.

Portfolio plans allow the lender to automatically build a conservative, balanced, moderate or agressive portfolio. That means the lender no longer picks individual loans to bid on but chooses to invest in a plan. The feature is implemented based on Prosper's standing orders. The difference is that it uses standing orders predefined by Prosper, not by the lender. Prosper shows "estimated returns" for each portfolio – currently ranging from 8.37 to 11.06 percent.
Comment: Lendingclub introduced this concept earlier on. Lenders are currently examining and debating on which rationale Prosper did build the standing orders behind the portfolios.

Estimated ROI is shown in listings

Prosper now shows the estimated return on each listing, including predictions for defaults and costs for the servicing fee. The default estimate is now based on Prosper's own data (past performance) rather then Experian data. 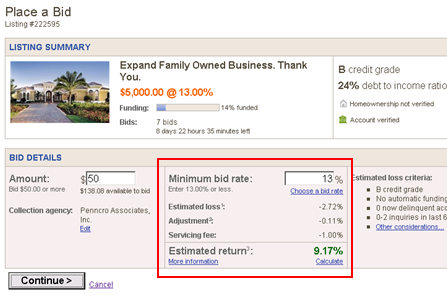 Comment: Prosper did once start off as a platform that provided a maximum of data. After removing borrower city earlier on, Prosper now removes nearly all public records of past listings. Several lenders complain that this changes prohibits them from educating themselves by browsing past listing. Prosper says the change was made to increase borrower privacy.
Since the information hidden by Prosper will probably remain visible (cached) by 3rd party sites, lenders interested in that information might increasingly use third party sites in addition to Prosper.

Borrowers could previously have only one active Prosper loan at a time. Now Prosper allows (under certain conditions) borrowers to list for a second loan.
Comment: While first lender comments on this are negative, I am ambivalent. Personally I think borrowers with multiple loans for different purposes are a high risk, but German Smava allowed multiple loans since the start and many borrowers have successfully got multiple loans funded. In this example of a borrower with three parallel loans, you can see that her credit grade lowers from E to F from second to third loan and her interested rate goes up to 12.2% for her third loan. While it is to early to judge, keep in mind that Smava after 7 month still runs with no lates and no defaults.
From a platform/service perspective allowing second loans can be an easy way to increase volume/revenue

For states without a cap.

Comment: I have to look into this topic further. One main critic is, that by the way Prosper designed that, it requires the lender to give his Prosper password to the 3rd party site.

Comment: Since there are likely to be more A loans than AA loans, Prosper will profit from this step.