‘P2P Income Partners‘ is a new investment fund by Symfonie Capital that will invest capital in p2p loans. The founder, Michael Sonenshine, an ex-investment banker, told P2P-Banking.com that he plans the first tranche to be 25 million Euro. He says: “Initially we will invest in loans issued by sites such as Prosper, Lending club, Funding Circle, Zopa, Isepankur and we will add fonds to the mix as we see fit. The P2P market is not only web-based. Â There are opportunities to make direct loan across Europe. Â The key to success is spreading the risk and doing careful due diligence.”. The fund is open to qualified investors. Minimum investment is stated as 100,000 US$.

As the end of 2010 approaches here is a selection of main peer-to-peer-lending news and developments covered by P2P-Banking.com: 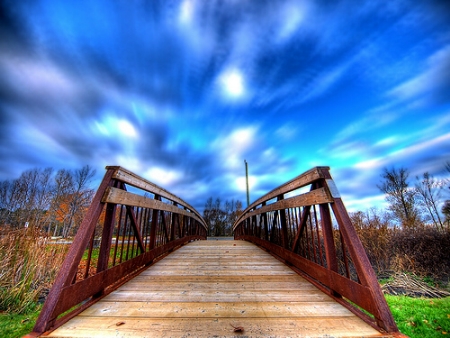 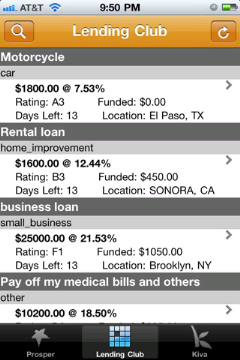 I just saw the first iPhone App that is to support lenders in using p2p lending services. It aims to help them keeping up to date with the latest listings at Prosper, Lending Club and Kiva.

The features of this app are rather basic, but with the number of people lending at p2p services there could be a market for a sophisticated app that really helps lenders select loans while on the move.

Update: There are in fact two other free apps to browse Kiva loan listings.

I just watched the recorded webcast. It’s great that Lending Club uses these to communicate to the users. However I found the way some information were presented to the lenders to be controversial. About 11 minutes into the presentation the company advertises the Annualized Default Rate of 2.36%.Â  Looking at the slide at 0:13:29 the company states “Less than Three Loans out of the 100 Default”. Is that right – does the percentage of Annualized Default Rate figure match the percentage of loans that default?

This does not match Lendingclub’s own definition of Annualized Default Rate, which is:

Annualized Default Rate is calculated by dividing the total amount of loans in default by the total amount of loans issued for more than 120 days, divided by the number of months loans in default have been outstanding and multiplied by twelve. The loans issued for less than 120 days are excluded from the calculation because loans are unlikely to default during the first 120 days.

I’ll create the following example to illustrate what Annualized Default Rate means to lenders. Imagine a bad-lucked lender that loaned 10 loans with 100 US$ each 12 months ago. First all went well, but after 10 months suddenly 5 of his borrowers failed to pay and defaulted. Colloquially that lender might swear: “That sucks, 50% of my loans defaulted”

Under the formula this gives us an annualized default rate of 8.3%. That sounds much better, doesn’t it? The important difference is that the annualized default rate figure is just a snapshot taken right now. It will rise over the time until the loans mature (if the lender does not invest in new loans). So after 36 months it will be much higher while the figure “50% of my loans defaulted” will not have changed after 36 months (if the other 5 loans continue to be paid on time).
You may want to ask, if the figure could fall instead of rise? No, for a given portfolio the annualized default rate can only go up over time – no loan can return form a default but addituionally further loans could default.

So what does that mean?

First: An annualized default rate of 2,36% does not match the message “Less than Three Loans out of the 100 Default”.
Second: Most of Lending Club’s loans are very young and the overall loan volume is growing. So even if – due to growth – the annualized default rate stays at 2,36% overall, it will rise higher for given loan portfolios orginated in the past. (Compare: ‘Lending Club Default Rates Much Higher than Initially Expected?‘).

The House of Representatives yesterday passed a bill that will move regulation of p2p lending services from the SEC to the newly created Consumer Financial Protection Agency (CFPA) in Spring 2010, provided the Senate and President Obama approve the new legislation.

Oversight by the SEC meant that Prosper, Lending Club and other p2p lending companies in the US had to go through an arduous registration process in the past, which forced them to close for new business for several months. Zopa even decided to exit the US market.

Prosper CEO Chris Larsen welcomed this development, saying: “In terms of how the Bill relates to peer-to-peer lending, weâ€™ve always believed that the industry should be regulated as a bank-like sector by a strong, holistic regulator focused on providing robust protections for both lenders and borrowers…”.