German p2p lending service Smava.de launched one year ago. Since the launch of Smava 393 loans were funded for a total loan volume of about 1.7 million Euro (approx. 2.6 million US$).

In a february survey 33% of lenders answered to be very satisfied with Smava and 63% were satisfied. 48% said their ROI met expectations while 19% said it exceeded expectations.

So far a 7% ROI is realistic. Only 3 loans have defaulted and 11 are (less then 30 days) late. In the past Smava cured the majority of late loans. The Anleger-Pool mechanism spreads the losses of a default across all loans of a credit grade. Therefore when 1 in 100 loans in credit grade X defaults, the lenders invested in the defaulted loan still receive 99% of the principal, while for lenders in the current loans returns are lowered by 1%.

Technically and on the process level Smava functions as promised.

Provided the borrower has a credit grade of at least ‘H’ (95% of the German population have credit grades between ‘A’ and ‘H’ so about 5% are excluded) and he has a sufficient income, chances for obtaining a loan through Smava are good. About two third of the listings were funded. The fee of 1% of the loan amount that Smava charges borrowers is low.

Smava’s growth has picked up in the last month (see chart). 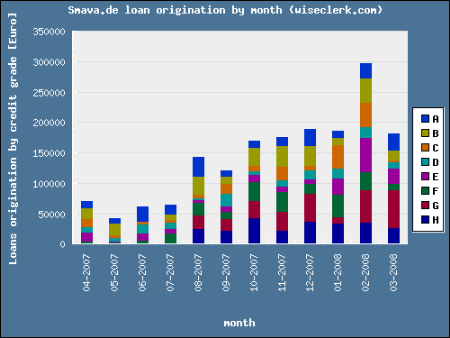 So far Smava has not reached a broad appeal. While press release state 25,000 registered users, only 650 have invested money and roughly 450 wrote a loan listing. Looking at the distribution of lenders by amount invested, the top 50 Smava lenders funded about 700,000 Euro (or about 40% of total loan volume). Currently lenders are limited to a maximum of 25,000 Euro investment. 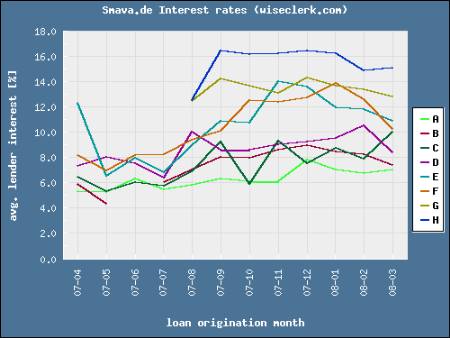 Smava charges borrowers a fee of 1% of the loan amount. There are no fees for lenders. Total revenue of Smava in the first year therefore was 17,000 Euro (1% von 1.7 million Euro). Prosper, Lendingclub and Zopa have much bigger p2p lending volumes per year. Boober‘s loan volume in the Netherlands is about the same size as Smava’s but in a market with only one fifth the size (by inhabitants). First priority of Smava must be to accelerate growth.