Exactly one year has passed since P2P-Banking.com published the post ‘State of Selected P2P Lending Companies‘. Time to update the information.

This post reviews a selection of p2p lending companies and does a rating on more factors than just loan volume. While I describe below what factors led to my rating, please note that the rating represents my personal opinion.

This amount is in all cases but Zopa retrievedÂ  from the company websites and represents loans funded from Feb. 16th till March 15th 2012, and then converted into US$ at today’s currency exchange rates.

This column especially rates if the new loan volume is growing continuously month after month. Furthermore it puts the absolute volume into perspective to the size of the market. It is obvious that absolute numbers in a country with a small population (e.g. Estonia) will be much lower than those in a country with a large population (e.g. US). Furthermore it takes into account if the (online) marketing measures of the the company succeed in winning new borrowers and lenders (though in most markets lenders do not need to be actively acquired). 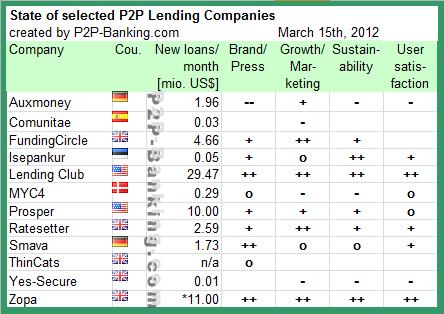 *estimate
Empty fields: I had not enough information to rate these. E.g. with some of the new UK p2p lending companies I felt I had too few indicators to reach an opinion.