The new study ‘Moving Mainstream – The European Alternative Finance Report‘ is available now (free download). The study by the University of Cambridge and EY looks at the development of p2p lending, p2p equity, crowdfunding and other alternative finance offers in Europe and compares it to the development in the UK. The very comprehensive study combined survey results from 205 platforms in 27 European countries with 50 survey responses gathered from UK platforms as part of the Nesta Study.

P2P-Banking.com was one of the research partners in this study.

Here are the main findings from the executive summary:

Since the global financial crisis, alternative finance – which includes financial instruments and distributive channels that emerge outside of the traditional financial system – has thrived in the US, the UK and continental Europe. In particular, online alternative finance, from equity-based crowdfunding to peer-to-peer business lending, and from reward-based crowdfunding to debt-based securities, is supplying credit to SMEs, providing venture capital to start-ups, offering more diverse and transparent ways for consumers to invest or borrow money, fostering innovation, generating jobs and funding worthwhile social causes. 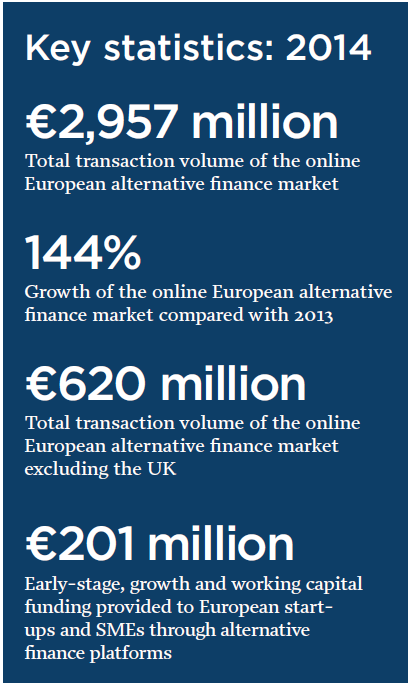 Although a number of studies, including those carried out by the University of Cambridge and its research partners, have documented the rise of crowdfunding and peer-to-peer lending in the UK, we actually know very little about the size, growth and diversity of various online platform-based alternative finance markets in key European countries. There is no independent, systematic and reliable research to scientifically benchmark the European alternative finance market, nor to inform policy-makers, brief regulators, update the press and educate the public. It is in this context that the University of Cambridge has partnered with EY and 14 leading national/regional industry associations to collect industry data directly from 255 leading platforms in Europe through a web-based questionnaire, capturing an estimated 85-90% of the European online alternative finance market.

The first pan-European study of its kind, this benchmarking research reveals that the European alternative finance market as a whole grew by 144% last year – from â‚¬1,211m in 2013 to â‚¬2,957m in 2014. Excluding the UK, the alternative finance market for the rest of Europe increased from â‚¬137m in 2012 to â‚¬338m in 2013 and reached â‚¬620m in 2014, with an average growth rate of 115% over the three years. There are a number of ways to measure performance across the various markets. In terms of total volume by individual countries in 2014, France has the second-largest online alternative finance industry with â‚¬154m, following the UK, which is an undisputed leader with a sizeable â‚¬2,337m (or Â£1.78bn). Germany has the third-largest online alternative finance market in Europe overall with â‚¬140m, followed by Sweden (â‚¬107m), the Netherlands (â‚¬78m) and Spain (â‚¬62m). However, if ranked on volume per capita, Estonia takes second place in Europe after the UK (â‚¬36 per capita), with â‚¬22m in total and â‚¬16 per capita.

Collectively, the European alternative finance market, excluding the UK, is estimated to have provided â‚¬385m worth of early-stage, growth and working capital financing to nearly 10,000 European start-ups and SMEs during the last three years, of which â‚¬201.43m was funded in 2014 alone. Based on the average growth rates between 2012 and 2014, excluding the UK, the European online alternative finance market is likely to exceed â‚¬1,300m in 2015. Including the UK, the overall European alternative industry is on track to grow beyond â‚¬7,000m in 2015 if the market fundamentals remain sound and growth continues apace.

The Financial Times published this article on the study. Rhydian Lewis, Founder and CEO ofÂ  RateSetter, commented: ‘It is encouraging to see the increasing prominence of alternative finance across Europe, and in particular to see peer-to-peer lending leading the way, with consumer and business lending amounting for nearly â‚¬368 million in 2014. The 113% growth of P2P consumer lending and 272% growth of business lending, chimes with our experience of the sectorâ€™s growing momentum and mainstream acceptance. I expect 2015 to be a pivotal year for the P2P industry as European financial services continue to evolve and the market breaks the â‚¬7 billion barrier. …’