This is a guest post by Krystyna MitrÄ™ga-NiestrÃ³j, University of Economics in Katowice, Poland

P2P lending develops quickly in the world in recent years. The platform Kokos.pl was the beginner at social lending in Poland in February 2008. The following portals began to operate shortly thereafter: Finansowo.pl, Monetto.pl (both in March 2008, however Monetto is not operating any more) and Smava.pl (equivalent to German Smava.de platform). During the first four years of the Polish p2p lending market the value of loans was estimated at PLN 130 million (approx. USD 43 million). It consisted only a small number comparing to the value of consumer loans granted by banks â€“ more than PLN 127 billion (approx. USD 42 billion), as of February 2012. Almost half of this amount (PLN 61 million, approx. USD 20 million) was borrowed through the platform Kokos.pl, which so far has more than 180 thousand users. After five years (situation at the beginning of 2013) from launching the first p2p platform approx. half a million the Polish residents borrowed approx. PLN 250 million (USD 58.5 million) (5 lat poÅ¼yczek spoÅ‚ecznoÅ›ciowych, 2013). The owners of the p2p platforms earn money mainly on fees charged for transactions. It should be noted, that the information about the p2p lending market in Poland is limited and current, comprehensive data are lacking.

The most important players on the Polish social lending market are: Kokos.pl (with almost 80% share in invested funds through p2p lending platforms), Finansowo, Sekrata, PoÅ¼ycz, SzybkoiPewnie, Bilonko, Zakra (Zestaw NarzÄ™dzi PoÅ¼yczkodawcy, 2013). The situation on p2p lending market in Poland is dynamic, however there is more positive tendencies associated with entering of the new players on the market, than the bankruptcies of the p2p platforms. The two examples of the latter are the collapse of Monetto.pl and Ducatto.pl. The Polish peer-to-peer lending market seems to be interesting for foreign p2p platforms (for instance the entrance of Swedish TrustBuddy in 2013).
Taking under consideration the information from the largest p2p platform Kokos.pl (the data include the 5 years period, from the launching of the platform) we can state that the statistical investor and borrower came from Masovian Voivodeship (is the largest, the most populous and the wealthiest voivodeship in Poland), are on average 34 and 33 years old. The statistical borrower borrows on average PLN 2,026 (USD 1.500) for 11 instalments. The average salary is equal to PLN 2,723 (approx. USD 2000).

At the beginning when first p2p lending platforms have launched a great part of Polish society was skeptical about such form of investing and borrowing. The threat of fraud and bankruptcies of p2p platforms hampered the development. However, thanks to changes and refining methods of verification the p2p platforms have became safer. The popularity of social lending is growing steadily in Poland. This trend is, among others, influenced by more attractive offer and promotions of p2p lending platforms.

Kokos.pl was the first p2p lending platform in Poland. The idea of the platform was established in 2005, but the concept was implemented in 2007. The work on the website began at the same time. After the legal and tax audits were completed the Kokos.pl started to operate in February 2008 and the provider of the largest social lending service at the very beginning was Blue Media. Blue Media is a highly innovative company that specializes in providing transactional services and delivering IT systems for institutions from telecommunications and financial sector (also banks) as well as for companies working within e-commerce and m-commerce (Background release, 2013). Kokos was aÂ breakthrough and first-of-its-kind p2p lending service on Polish financial market.

Now Kokos.pl is the largest social lending platform in Poland, which brings together investors and borrowers. The main statistics concerning Kokos.pl (as at 07.09.2013) are shown below (Kokos.pl. Statystyki, 2013):

The advantages of this platforms are (Kokos.pl.Â Loans and investments, 2009):

Loans from Kokos.pl are granted to both physical and legal persons. The borrower determines the conditions on which he or she wishes to receive a loan in the process of starting an auction: amount of the loan, number of instalments, interest rate and waits for aÂ decision. The potential investors observe the auction, analyze the profile of the borrower (e.g. income, verification statuses) and ask questions. In order to gain the confidence among investors, the borrower should watch the auction and provide answers to the questions. Investors make their decision based on information regarding aÂ user’s loan-repayment history, amount of the salary, etc.Â The auction lasts 7 days. In the process of starting an auction or until the submission of the first bid by the investor, the borrower can extend the duration of the auction up to 14 days. If the borrower collects 100% of the capital before the end of the above-mentioned time limit, the auction will be completed ahead of time. The potential borrower can delete the auction until the first bid by the investor. By contrast, with the auction – the loan offer means that this is the investor who determines the conditions of the loan. Within 48 hours, the investor should confirm whether agrees to lend money to the given lender. After acceptance, the investor has 72 hours for payment. In case when the investor will not take the decisions or will not transfer money â€“ the loan offer is cancelled. The lender can try to make an auction or search for another loan offer. The first loan granted to the borrower could be up to PLN 1,000 (approx. USD 330[1]). Along with timely repayments and activity the limit increases successively to PLN 2,500 (approx. USD 825), PLN 5,000 (approx. USD 1,650), PLN 10,000 (approx. USD 3,300) and PLN 25,000 (approx. USD 8,250).

The user rating is very important for the security of the transaction. It specifies how much and how many loans the user can take out. The rating improves with the timely redemption of loans and with time â€“ from the date of opening the userâ€™s account. The lack of timely payments decreases rating. The rating determines the estimated risk of investments â€“ the lower the rating, and less possible ways of verification – the risk is higher. The most risky segments of users at Kokos.pl are holders of:

-Â Â Â Â Â Â Â  â€œone green starâ€ (no negative entry in the databases and to get the second â€œgreen starâ€ the user must timely pay the loans of PLN 500 (approx. USD 165) or more and have the active account for at least 3 months).

The total amounts of debts under collection is equal to PLN 14,180,400 (approx. USD 4.6 million). The ratio of payment promptness of all loans is very high up to 96.55%. Table 2 shows the main statistics about auctions and loans at Kokos.pl.

The interest, as has previously been noted, which is one of the main factor taking under consideration by borrowers and lenders in their decisions in p2p transaction is nowadays equal 16%. All p2p platforms in Poland have the same maximum level of interest rate. This is a result of “anti-usury” regulation that is aimed at preventing excessively high interest rates. The purpose was to limit the maximum interest rate of a bank loan to the fourfold of Lombard rate, which now (September 2013) is equal to 4% (OsiÅ„ski and Tymoczko, 2007). Table 3 shows the current average interest rate on cash loans in the 20 largest banks in Poland (% p.a.).

Table 3: The current average interest rate on cash loans in the 20 largest banks in Poland (% p.a.) (Oprocentowanie lokat i kredytÃ³w, 2013)
It is worth to mention that â€˜express interest-free loansâ€™ are an interesting novelty introduced by Kokos.pl. The borrower, who takes aÂ loan and repays it within 14 days, pays no interest but only aÂ commission of 0.5% to 5% (for the service provider) and the cost of new user verification – PLN 1 (approx. USD 0.75). This means that the cost of aÂ loan of PLN 500 can be from PLN 2.50 for existing users of Kokos.pl to PLN 26 for new customers, provided the amount owed is repaid within 14 days (Express interest-free loans, 2013).
It therefore turns out, that the interest rate offered by p2p platforms does not diverge from those offered by commercial banks. But the conditions and procedures which have to be met by borrowers and lenders differ of course. Such a low level of interest rate can however limit the inflow of investors to p2p platforms. But when we compare the interest rate offered by p2p platforms with those offered by commercial banks â€“ the banksâ€™ offer looks less attractive (term deposit rates in the 20 largest banks vary from 3.30% p.a. for
1 month deposits to 4.51% for 12 month deposits) (Oprocentowanie lokat i kredytÃ³w, 2013).

It is not complicated to become an investor on Kokos.pl. An investor may be any natural person who holds a valid identity card, who registered the account in Kokos.pl and carried out verification of bank account. The potential the lender can invest from PLN 50 to PLN 5,000 after analyzing the conditions of auction. If loan has not been fully accepted by the potential borrower, the investor can move into another auction or decide about the repayment within 2 days. The borrower is required to repay the instalments until the 11th day of the month following the month in which the loan agreement has been concluded. The following ten fundamental principles of safety were taken into account at the moment of creating Kokos.pl (BezpieczeÅ„stwo inwestycji, 2013):

1)Â Â Â Â Â  Investment liquidity â€“ the investor does not have to block funds or make any earlier transfer to any deposit accounts. He or she can give up the investment before the closing of the auction and transfer funds to any other ongoing auction.

2)Â Â Â Â Â  Return on investment in the cash loans – the investor can achieve return on investment exciding more than 50% per year. This is possible thanks to the voluntary, advance repayments made by borrowers and the monthly capital payments plus interest, which the lender may then invest.

3)Â Â Â Â Â  Obligatory verification of bank account – Kokos.pl checks whether the user is actually the owner of the bank account on which potentially the loan will be granted or the payments will be made.

6)Â Â Â Â Â  Ratings â€“ affects how much and how many loans the user can make.

7)Â Â Â Â Â  Creating userâ€™s own risk assessment model for an investment – starting with investments the user should carefully check a few key parameters of auctions, among others:

-Â Â Â Â  the number and amount of loans that are about to settle by the borrower,

-Â Â Â Â  the sum of the monthly instalments,

8)Â Â Â Â Â  Borrowerâ€™s full accident insurance – the borrower has a possibility to insure the loan against a series of events that can result in the loss of his or her ability to pay the debt. Kokos.pl offers the insurances in cooperation with Cardif Polska S.A and Cardif Assurances Risques Divers S.A. – the insurable risks include death, disability to work and unemployment (Kokos adds insurance, 2008).

9)Â Â Â Â Â  Investment diversification – the system allows granting loans from a few or a dozen or so lenders.

10)Â  The development of new security measures in Kokos.pl â€“ introduction of new methods of verification and insurance.

The important feature of Kokos.pl is that it is attempting to be the most innovative p2p platform in Poland and introduces new interesting product, such as for instance â€“ SMS loans coupled with prepaid MasterCard PayPass card (Kokos Issues Prepaid Card, 2010).
Table 4 shows Kokos.pl in comparison with two others important players on Polish p2p lending market Finansowo.pl – P2P lending service that merged with German Smava to join forces in the Polish market and Sekrata â€“ Polish platform, which debuted on the Internet in late 2010. 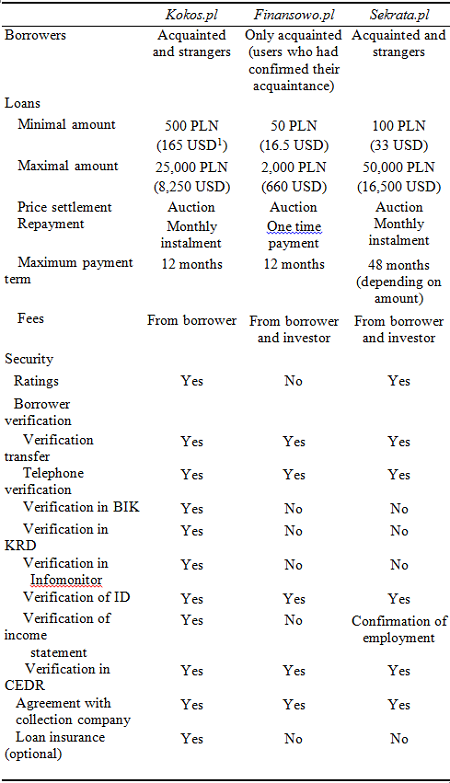 Kokos.pl remains the most popular and the most important player on the p2p market in Poland. The most important positive feature of this platform is certainly the issue of security and developed, in comparison to other Polish p2p platforms, system of verification. Kokos.pl is still the market leader and despite the competition from other p2p platforms, at present is hard to predict the change of this situation in the nearest future.