Last year in September I signed up at UK platform Bondmason in order to test first-hand how an investment of 1,000 GBP would develop. As described in the review article, I wrote when I started, Bondmason is an aggregator that automates the investment across many p2p lending platforms for the investor and takes a fee for that. Bondmason projected a target return of 7% after fees and bad debt.

Allocation of my deposited funds into loans went okay. There was some cash drag, but not as much as other investors have experienced.

Deployment speed of my investment on Bondmason – click for larger image

What was bad, was that it became clear to me, that the interest level in combination with the non-performing loans would make it very unlikely for Bondmason to reach the projected return – at least for my portfolio. Especially with the Invoice Discounting loans there were issues.

In April 2017 Bondmason announced it would require a larger minimum investment amount of 5K (previously 1K) and raise fees for small portfolios to 1.5% (previously 1%). Dang. I was in no way interested to deposit more money. So my portfolio did not even get to celebrate 1st anniversary. In July I gave them notice to liquidate my portfolio/account. Since then I withdrew 1,013.94 GBP – only slightly more than I deposited. My account still exists as there is 20 GBP stuck in two property loans in default and also 1.41 GBP in cash. 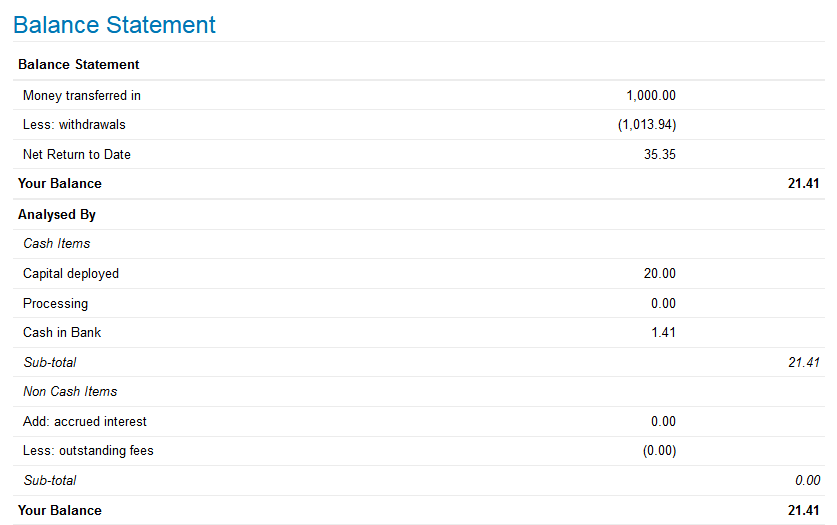 Regardless of which way I look at it, the result is clearly bad. Obviously Bondmason by far missed the targeted return of 7% in my case.
If I take an optimistic view and just assume, my 2 defaulted loans would recover today and the outstanding amount is paid to me, then my self-calculated yield (XIRR function) would be 4.3%. If I need to write off the 2 loans in default then my self-calculated yield is 1.9%. And that is before tax – as a German resident I cannot offset bad debt against interest earned for tax purposes. And on top of that the pound has been detoriating against the Euro value in the past 12 months (not Bondmason’s fault).

So to sum up: I liked the idea of an aggregator and the Bondmason setup allows passive investing in a diversified mix of p2p loans. But my returns are among the worst I ever experienced on p2p lending platforms and I am certainly happy I conducted this test with 1,000 GBP only and did not risk more.

If you want more details about the development of my portfolio throughout the past year there are more snapshots with screenshots over time in this thread.

About a year ago I started lending money to African entrepreneurs via MyC4.com.Â  So far it did meet my expectations. The process of uploading money worked without problems, there were always enough loan applications to select from and the offered interest rates were high enough to allow for good returns despite the risks. The only point, where the usability need to be vastly improved is a better status overview for the payment status of all loans in the portfolio. MyC4 does show the payment status in detail for each loan, but its hard to get an aggregate overview.

I invested at 13.8% average nominal interest rate. 194 loans are currently running, 29 are repaid in full, 12 are open/pending (not yet disbursed), 1 defaulted and 4 were cancelled. 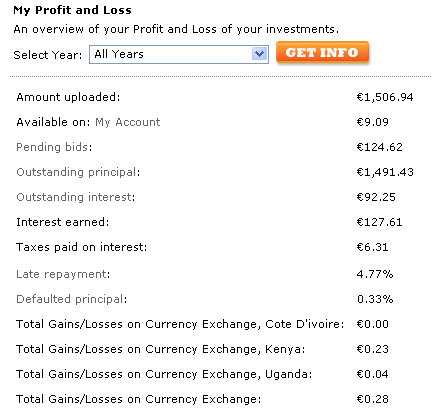 The ROI is much lower then the average interest rate, since it does take weeks before an investment in a loan becomes active – and unlend money does not yield interest. A further point is that several late loans affect the ROI.

Read all MyC4 posts from the past months.