Today Lendy’s Joint Administrator’s second progress report was published. It reveals that they took action against two former directors of the marketplace company.

The Joint Administrators have now also carried out interviews with both Liam B.. and Tim G.., the former directors of Lendy. The investigations have been concerned with a number of transactions, most significantly payments of approximately Â£6.8million that were paid to entities registered in the Marshall Islands for apparent marketing services carried out for Lendy. It is the Administratorsâ€™ position, however, that these payments were ultimately for the benefit of Liam B.. and Tim G…

As a result of these investigations, on 1st June 2020 the Joint Administrators made an application to Court for a worldwide freezing injunction to be granted over the assets of Liam B.. and Tim G.., as well as proprietary injunctions on the properties owned by companies linked to the directors, RFP Holdings Limited and LP Alhambra Limited. The Order was granted on the 4 June 2020. Proceedings have now been commenced against Liam B.., Tim G.., RFP Holdings Limited and LP Alhambra Limited. Owing to the nature of these claims, the Joint Administrators are unable to provide further information at this time.

P2P Lending marketplace Lendy is in administration according to a statement by the British regulator FCA: “On 24 May 2019, following action taken by the FCA, Lendy Ltd, a regulated Peer-to Peer (P2P) firm, appointed Damian Webb, Phillip Rodney Sykes and Mark John Wilson of RSM Restructuring Advisory LLP as administrators. The same administrators have been appointed for two further related, but unregulated, firms: Lendy Provision Reserve Ltd; and Saving Stream Security Holding Limited. These appointments have been made by the firms, in respect of Lendy Ltd, with the consent of the FCA.”

There is an ongoing FCA investigation into the circumstances that have led to this action.

Lendy was in growing troubles over the past weeks. Lendy was put on a FCA watchlist in January. In April the FCA restricted the actions the company could take ‘[the firm must not] in any way dispose of, deal with or diminish the value of any of its assets and must not in any way release client money without in either case the prior written consent of the authority’.
The interest payments for April, due on May 1st, were delayed for 2 weeks, which Lendy blamed on technical problems with the banking partner. Early today trading on the secondary market was suspended, when the ability to trade was removed. However the trading had nearly stopped anyway as there was little buyer demand.

Lendy finally succumbed the unsustainable level of defaults of the development loans and the unsatisfactory level of recoveries from these. Members of the management were furthermore already engaged in roles in other companies.

There is an outstanding loan portfolio of about 155 million GBP, of which about 90 million GBP are in default.

These events come a year after another property lending marketplace, Collateral entered administration.

Other European p2p lending companies that failed include Boober, Comunitae and Trustbuddy.

The market situation on UK property marketplaces for bridge loans with high interest rates has turned drastically in the past 2 months. For a long time before there has usually been much more investor demand than could be soaked up by loan demand. That the situation has changed is most visible on the loans on offer (mostly through the secondary markets). There is currently nearly 8 million GBP on offer on Lendy (that was close to nil 8 weeks ago). At Moneything there is 2 million GBP on offer and at Fundingsecure 0.6 million GBP. Collateral recently raised the interest rate for new loans from 12 to 14%.

So what is causing this change? I will look at possible causes and measures the marketplaces could take to react.

So what could marketplaces do and what measures are they already taking?

What is your opinion, dear reader?

P.S.: On the continent at Estateguru with its 10-12.5% interest property loans there is no change of market conditions. Investor demand continues to outstrip loan supply.

For investors, that considered using the Lendy platform, but have not yet signed up, now may be a very good time to do so, as Lendy is offering 50 GBP cashback to investors that invest at least 1,000 GBP on the condition that this amount stays invested for at least 3 month. Lendy lists bidge loans secured by commercial property. The interest rates are typically in the range of 7% to 12% and the loan duration is typically 3 to 12 months. Currently a lot of loans are offered on Lendy’s secondary market, which will allow easy diversification into several loans upon signup.

I have been investing on Lendy for 2.5 years now (when I started it was still called Saving Stream) and I reviewed my Lendy portfolio only last month on the blog.

Lendy is open to international investors. While a UK account is not mandatory, I suggest opening a UK bank account online via Transferwise – this will make things easier, if multiple UK marketplaces are used (my article on Transferwise Borderless account).

To get the cashback, just register at Lendy via this link and start investing.

When I started in late 2014 the UK p2p lending marketplace Lendy was still called Saving Stream, but it rebranded this year. Lendy is a platform offering bridge loans secured by property. I last reviewed my portfolio performance here on the blog in January 2016. Since then the following major changes have taken place at Lendy: 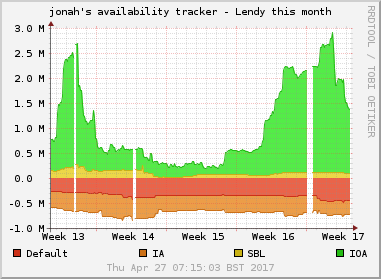 Especially the last point has triggered debates on the chances for recovery and there are concerns voiced among investors about to optimistic valuations. The secondary market swings from time to time between mosty empty (except for loans in default) and plenty.

I have continued to ramp up my portfolio reinvesting returns and making new deposits via Transferwise and Currencyfair. This was before the Brexit decision. As for now I am simply reinvesting. My portfolio amount is 10K GBP spread out over 14 different loans. The vast majority is in 12% interest rate loans. I have made three exceptions in the past, but usually only with low amounts and when rebalancing the portfolio, I try to sell these lower interest loans first. So far I have not had any loans in overdue or default state – but there are many of those on the platform (see above). My loans have long remaining terms with the shortest being 147 days at the moment.

My yield (self calculated with XIRR) so far is 12.1% in GBP. Unfortunately I deposited most funds during the time when the pound was at a high, therefore calculated in Euro currency the yield is only 4.4% for me.

Lendy is still one of my preferred p2p lending marketplaces, due to interest rates, real estate as a security and liquidity. I do see the risks in the valuations, but I figure that at least the security will cover part of the loan amount and will with a high probability prevent total loss in a defaulted loan. I might get more picky in selecting loans, but so far Lendy for me is actually a platform that requires less management and monitoring than several other marketplaces I use. 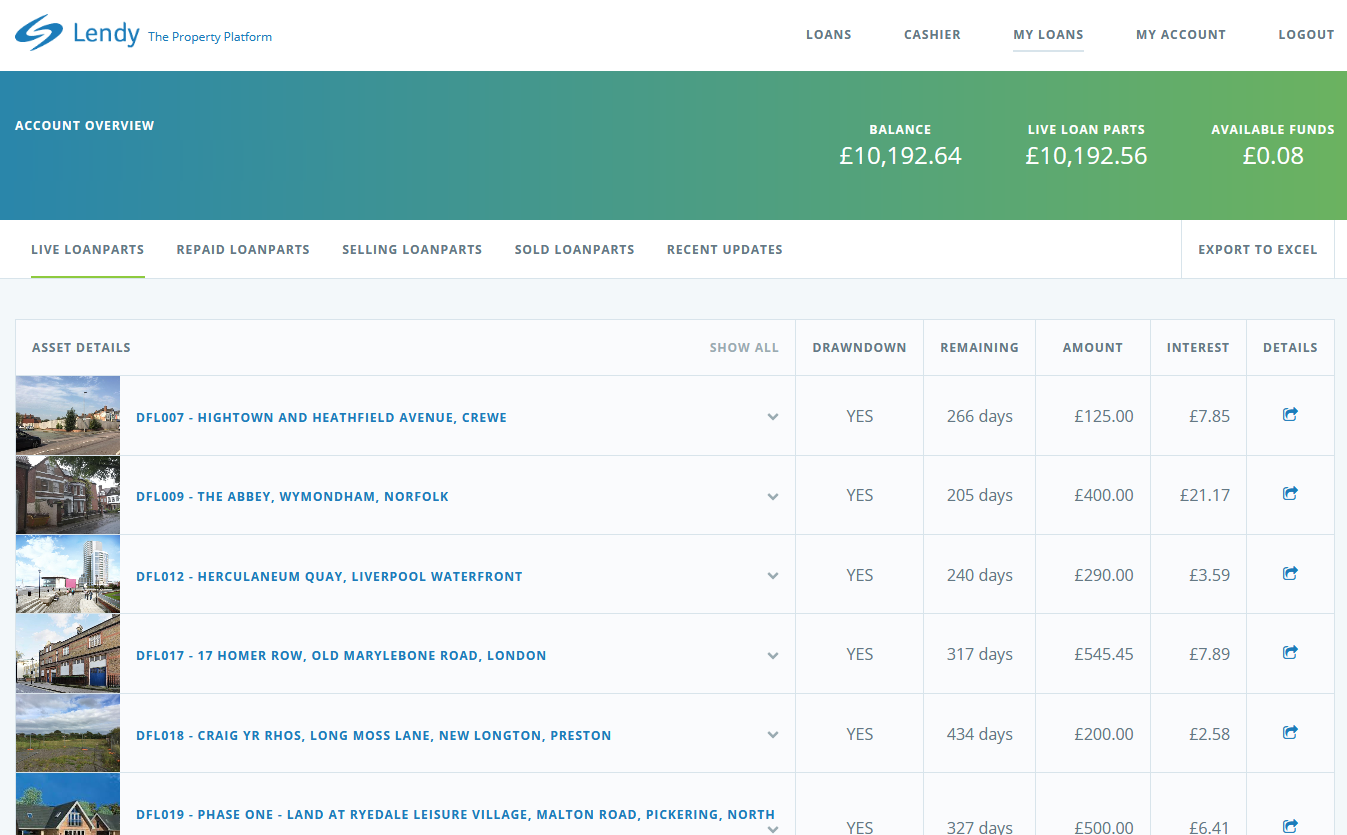 What was formerly Saving Stream is now called Lendy. The operator of the marketplace has been Lendy Ltd. already, it was just trading as Saving Stream for investors. Now under the new domain Lendy.co.uk the company has brought together its services for investors and borrowers citing feedback by users. There is some speculation that rebranding could have been necessary as a prerequisite to full FCA authorisation as the FCA may have objections to the “Savings” in the old name.

Following feedback from users,Â we are integrating the Saving Stream platform under the Lendy brand. This is in order to simplify the brand and make accessing the crowdfunding platform easier for all our clients.

As part of the rebrand, investors and borrowers will now use the same website:

www.lendy.co.uk
Features on the refreshed site include a new Help Centre, with an extensive FAQ section and glossary. We’ve also added all of our recent news into a new Customer News section.
The rebrand has been guided by platform users who were very positive about the Lendy brand. We hope you like it. The Saving Stream website will be redirected to the new Lendy website in due course.

While the new brandname is short and fitting, I note that it is somewhat close to other offers in the p2p lending space e.g. Lendix or Lendit. There even is a p2p lending marketplace in Lithuania named Lenndy (double ‘n’).