Well that was a surprise. When I went to bed last midnight the news reported more indications for a remain vote than for a leave. Even with psephologists cautioning that the referendum is very hard to predict due to the lack of comparision data from earlier votes, it seemed to me that the outcome was likely pro EU.

While I had personally wished the Brits to stay in the Union they took a democratic decision and now the politicans have to act upon it to execute divorce.

Awakening to the new reality I now have to assess what this means for my personal p2p investment strategy – as a foreign investor. Only a small portion of my p2p investment portfolio is invested in UK platforms (a substantial amount at Saving Stream, small amounts with Ablrate, MoneyThing and Rebuilding Society). The markets are in turmoil, and I have already taken the hit by the pound dropping sharply compared to the Euro this night.

Another effect is that the uncertainty is causing more investors to put up loan parts for sale – the effect is measureable on Saving Stream and currently accounts for a plus of approx. 1M GBP loans on offer there. Still this amount is very small compared to fluctations of liquidity levels due to other factors. For most loans this now means that there is a considerable delay in selling loans, due to queue size. However this could be cleared up quickly by one or two large loans repaying and the interest payout on July 1st. 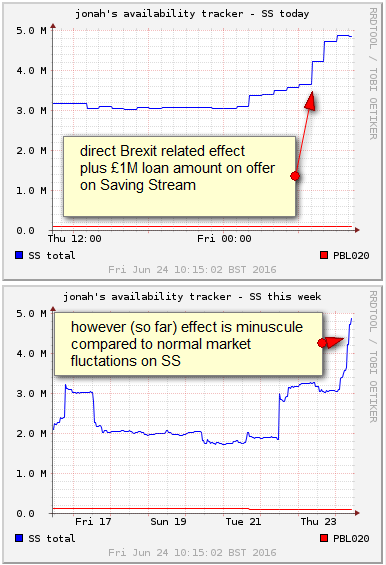 With Saving Stream and Moneything loans will depend highly on the development of the property prices. Some expect a drop in property prices. I think it is to early to tell if that will happen, but I think it is very likely that there will be slow down in new development activity while everbody waits to see what the outcome will be. This will affect the demand for bridging loans and thereby Saving Stream and Moneything to a cetain degree.

And then totally unpredictable there is the question how this new direction will effect the European economy as a whole and whether it might trigger a recession. While I am optimistic that it will not, there is an extreme amount of uncertainty and I have to consider that this might impact my p2p investments on continental European platforms.

For now I have decided that I will not deposit new funds on UK platforms (which I was planning to do) but will not withdraw funds either at the moment and will just keep reinvesting the proceeds. I see little point in selling off loans (would be hard right now anyhow as liquidity seems to dry off temporarily), and exchange the amounts back to Euro. That would guard me from further drops of the pound exchange rate, but I think it is not sure that the pound will fall into a continuing decline (even so that seems more likely than any rise in the pound rate vs the Euro).

For the continental platforms my strategy remains unchanged by the event, even though I think that the risks on some platforms have risen somewhat too in the mid-term outlook.

Latvian p2p lending marketplace Twino today announced plans to shield UK investors using the platform from currency risks. So far all investments on the platform are conducted in Euro. Twino already takes the currency risk of Polish Zloty, Danish Krone or Georgian Lari versus the Euro. Now it plans to make the platform more attractive for investors holding their assets in GBP. The announcement reads:

One of TWINO promises is that we protect investors from currency risk. Thus, while investing on TWINO you donâ€™t need to worry about Polish Zloty, Danish Krone or Georgian Lari appreciating against euro, as every transaction on the platform is performed in EUR.

However, investors from the UK still face the risk of EUR appreciating against GBP, which might lower their returns. Therefore, next week we are planning to launch a major upgrade that will remove the currency risk for investors, who hold their investable assets in British Pounds, equalizing the benefits of investing on TWINO with Eurozone investors.

The functionality will allow investors to choose the currency that they want to invest in (either EUR or GBP), and every transaction on TWINO will be processed in the chosen currency (including deposits, withdrawals, investments, repayments, etc.).

We will provide a further notice when the new functionality launches, and will be reaching out to existing investors, asking if they want to convert their TWINO accounts to GBP.

We are glad to be the first platform in Continental Europe to provide such functionality and hope some of you will benefit from it!

The Twino CEO Jevgenijs Kazanins indicated that Twino is hedging the currency risk, an action that is possible for a platform with volume but not available or viable for individual retail investors, would they strive to do it on their own.

CARE International UK runs the p2p microfinance platform Lendwithcare.org. For a minimum investment of 15 GBP anybody can help funding a loan to entrepreneurs in Africa or Asia.

Lendwithcare has partnered with local MFIs in Benin, Togo, Philippines, Cambodia and Indonesia that disburse the loan to the borrower. Lenders do not receive interest. Aside from the default risk (Lendwithcare claims less than 2% bad debt) lenders also bear the currency exchange rate risk. Lenders do fill their account via Paypal or credit card, withdrawels are through Paypal.

Though the concept closely resembles Kiva’s, it is interesting to see the approach used by a long-time established aid and development organisation. The site shows the experience CARE has with marketing and fundraising. It looks much more flashy (at least compared to the old Kiva page).

Lendwithcare was launched in April 2010. Since then 243 loans were funded. At the moment there are about 32 loan request by entrepreneurs listed.

Today was another conference call by Kiva with its lenders.

Kiva informed about the situation of FundaciÃ³n San Miguel ArcÃ¡ngel (FSMA), a field partner in the Dominican Republic, who is unable to repay lenders and will soon cease operations.

On the question, why Kiva does provide fewer translations, Kiva explained that they have a hard time to find enough volunteers to translate all texts. Another factor is the limited availability of engineering time to improve features related to translation.

Kiva decided in August to not provide translations to English for some loans. In this “non-translation experiment” Kiva will try to measure the effect of omitting the translation on the funding rate and speed.

In the discussion on the currency risk Kiva asked for feedback from the lenders on which information should be presented. One suggestion was to make the information that a currency risk may occur more eye-catching in the loan selection. Consensus was that currency risk information is more important for “power” lenders than occasional, infrequent lenders.

Conversion rate: Of 100 people visiting the website, 8 make a loan.
40 percent of the people who put something (loans) in the basket, do not complete the check-out.

Kiva has now enacted changes in how currency risks are accounted for. The model was first proposed in March.
Now MFIs can choose “currency risk protection” for their new loans. If this option is selected lenders will have to cover any losses that arise from a devaluation of the local currency exceeding 20% (for the part that is over the 20%).

On listed loans at Kiva there will be a new information status on the “about the Loan” Section under “Currency Exchange Loss”. The status will either be:

I browsed some new loan listings today – most are still offered under the “covered” rule, one example of a loan under the new “possible” rule is this Tajikistan loan. END_OF_DOCUMENT_TOKEN_TO_BE_REPLACED

In today’s conference call, Kiva explained plans to reduce currency risks for the local MFIs by having lenders absorb losses, if currency depreciation is higher then a threshold x% (with x% yet to be defined).

Currently currency risk for loans issued in local currency is fully taken by local MFIs of Kiva. In future MFIs can select for new loans, if they want to keep it that way, or if a new stop-loss rule shall apply.

The details are explained in this presentation:

Slide 14 shows how many of the loans would be affected, if the stop loss rule would have applied in 2008/ in the last 5 years.

One question in the Q&A of the conference call was, why currency risk came up just now after years of operation of Kiva and the answer was that the problem is now more pressing with the recent appreciation of the US dollar.

Another question was, if a possible solution would be that Kiva just would supply the hard currency as collateral to a local bank in the country which would then issue the loan in local currency. The answer was that this would be impractical, because in case the local currency appreciates then the bank would demand a raise in the collateral, which could not be handled as neither Kiva has the funds nor could the lenders on the loans affected be expected to make an additional payment for this.

It will be interesting to see, if some MFIs stick to the current mode and upload loans with no currency risk sharing to the platform.