I have been following and using Zidisha for years. Today I am glad to be able to publish another interview with Julia Kurnia, Director and Founder of Zidisha Microfinance. An earlier interview conducted 2011 is here.

Zidisha celebrates its fourth birthday. What is the current status?

Four years ago, Zidisha launched as the first direct P2P lending platform to bridge the international wealth divide: We linked economically disadvantaged individuals in some of the worldâ€™s poorest places directly with individual lenders and allowed them to transact each other directly.

This went against conventional wisdom because it had always been assumed that this demographic could not use web-based services and needed local organizations to serve as a go-between.Â  For example Kiva, which pioneered online fundraising for microfinance, contracts with intermediaries in each country to manage the loans and communicate with lenders on the borrowersâ€™ behalf.Â  Before Zidisha, nobody had attempted to connect people in developing countries to the international P2P lending market.

What we have learned in the past four years is that direct P2P lending across the international wealth divide is not only possible, but that the benefits are even greater than that of domestic P2P lending services.Â  Banking services in developing countries are so inefficient that borrowers routinely pay interest rates of 50% or more, if they can access loans at all.Â  With Zidisha, borrowers pay a transaction fee of 5% and can then choose to offer interest of 0% to 15% to lenders.

Weâ€™ve funded over 3,000 loans in the past four years, and so far their repayment rates are a bit better than those of small business loans in the United States.Â  To date, 90% of the loans that are due to have been repaid have been repaid with interest, 5% are repaying late, 2% have been forgiven by lenders who opted out of repayments and 3% have been written off due to default or catastrophe suffered by the borrower.

Compared to p2p lending services Zidishaâ€™s growth/loan figures are moderate. What reasons do you see for this difference?

The moderate pace of growth is mainly due to the fact that we are pioneering something that has never been tried before: a P2P lending community that connects people directly, without any intermediaries, across previously impregnable barriers of location, social group and culture.Â  There is no precedent for this, no established best practice to follow.Â  So we are scaling slowly, and continuously adjusting our lending model in response to experience.

How difficult is it to enter a new country to allow more borrowers to use Zidisha? 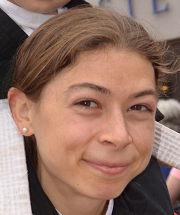 That varies a great deal, depending on the ease with which we can integrate with local money transfer services in each country.Â  In Kenya, we use the M-PESA mobile banking service to send the loans directly to our membersâ€™ cell phones, and that is really an ideal solution.

We do not have brick-and-mortar offices or employees in borrowersâ€™ countries; all of our application review and payment transfer services are provided remotely over the internet.Â  Volunteers – both international interns and local community members – frequently visit borrowers and offer information sessions, but they do not manage loan transactions in the way traditional loan officers would.Â  So once we are able to open a cost-effective electronic payment channel, that is really all we need to enter a new country.

Is the currency risk an important factor in Zidishaâ€™s operations?

At Zidisha, lenders assume currency risk: they can lose money if the borrowerâ€™s currency depreciates against theirs over the course of the loan.Â  One would expect that this would cause lending volume and interest rates to rise and fall in response to exchange rate fluctuations, but this had not happened for the most part.Â  I think the reason is that lenders consider participation in Zidisha to be a philanthropic activity.Â  They pay more attention to the social impact of the loans than the financial returns.

What are the main marketing channels for Zidisha?

We do not engage in paid advertising.Â  Our growth among borrowers and lenders has been almost entirely through word of mouth.Â  We have also been featured in blogs and in the press fairly often: Mashable, Entrepreneur, Bonoâ€™s ONE campaign, and others. 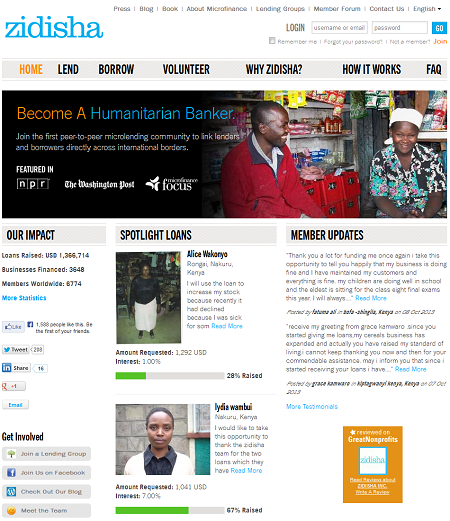 Has the Zidisha model been copied by other organizations?

Our model has not been replicated, but it has certainly inspired others to move in the direction of connecting people directly and reducing the role of intermediaries.

One example is Kiva Zip, an exploratory P2P lending platform which Kiva has launched in the US and in Kenya.Â  Kiva Zip makes it possible for borrowers to communicate directly with lenders, while still partnering with local organizations to vet applicants and follow up on repayments.

Kiva Zip is somewhat of a hybrid between ZIdishaâ€™s pure P2P lending model and the traditional intermediated Kiva model, which leverages Kivaâ€™s strength and depth of experience in partnering with local organizations.Â  Zidisha differs from Kiva Zip in that we do not allow local organizations to manage the loans or post content on behalf of borrowers.Â  We are really passionate about the direct person-to-person connection, allowing each individual to tell their story and for our members to talk to each other without any filtering.

What goals does Zidisha have for 2014?

We are focused now on transitioning from a successful pilot to an online community that can operate at scale.Â  This involves automating many of the functions that used to be done manually, and decentralizing more services and authority to our members.

Instead of building offices and hiring large numbers of employees, we are taking a Wikipedia approach to growing our organization: dozens of â€œvirtual volunteersâ€ and interns from all over the world collaborate to build and manage our community.

We also aim to enter more countries, including at least one in Latin America and one additional country in Asia.Â  Currently we offer lending services in Benin, Burkina Faso, Guinea, Indonesia, Kenya, Niger and Senegal.Â  Expanding geographically will make it easier for our lenders to hedge their currency risks, while meeting remarkable entrepreneurs in interesting new locations.

Mrs Kurnia, thank you for the interview.