Following up on the interview (see ‘Smava expands p2p lending to Poland‘) I just took a look at Smava.pl, which has now launched. I don’t speak Polish but the layout of the site is very similar to the Smava Germany site, so navigation was no problem.

As expected interest rate levels in the Polish market are considerately higher then on Smava.de. At the moment there are 4 active listings with (nominal) interest rates ranging from 15.9 to 23.5% (maximum interest that can be entered in the application form for a loan is 26%). Loan terms are short. Borrowers can select from 3 months (minimum) to 36 months (maximum) with 9 possible durations.

Smava did keep the groups feature, which puzzles meÂ  as groups have not gained any use on the German version in the nearly 2 years since launch.

One of the partners of Smava in Poland is Money.pl, a finance website with 2.6 million users per month. This is a good marketing move to gain visibility for the concept and to close up on the 3 competitors that launched earlier.

The management team consists of PrzemysÅ‚aw MoÅ›cicki, dr Marcin Klinowski and Arkadiusz Hajduk. Hajduk is a ‘veteran’ in p2p lending. He co-funded Fairrates (in Denmark) and later was product manager on the IOU central team (Canada). 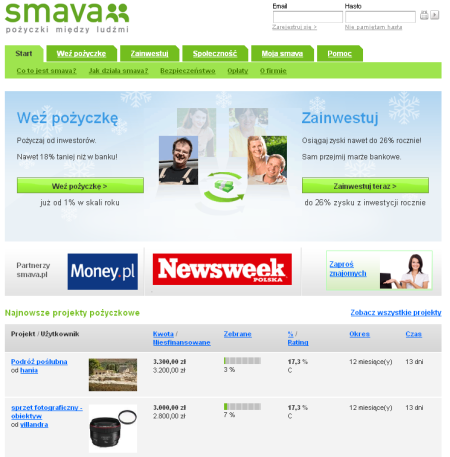