Lendingclub has a new homepage. At least I think it is new, but maybe I have overlooked it for quite some time since Lendingclub used to point the homepage to the Lendingclub blog and I usually went directly to the blog URL.

The homepage is mainly an information showcase for new borrowers or lenders. Unlike Prosper it has few real functions. While most data remains restricted to logged in users, it does show a few rankings and statistics.

Today Lendingclub announced that it passed the US$ 1 million loan mark. With 683 verified lenders Lendingclub is still small compared to Prosper numbers, but growing steadily. 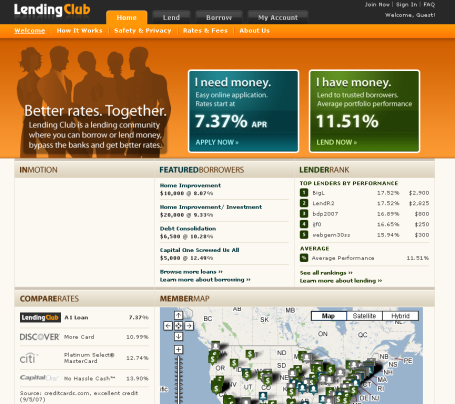 Prosper.com published a "People to People Lending Market Survey" for August. The Survey covers Prosper data and gives a commentary by Chris Larsen, CEO of Prosper.

In the commentary the main point is the focus of lenders on higher credit categories: "…At the same time, lenders on Prosper are exhibiting rational behavior by steering their bids toward borrowers in the higher credit categories and being far more cautious about chasing higher rates offered by subprime borrowers. Evidence of this flight to safety is seen in Prosper's mix of funded borrowers. For example, the subprime category accounted for only 9 percent of loans funded in August 2007, a marked decrease from August 2006 and the 2007 year-to-date average of 25 percent and 14 percent, respectively. What remains to be seen is whether lenders on Prosper will start placing less weight on homeownership as a factor in their bidding strategies…"

When studying the figures careful attention should be given to the definitions. HR loans are completely excluded from the Estimated Annual Return on Prosper Select Index and the Average Borrower Rates on Prosper Select Loans table. Furthermore loans that did not fit criteria on delinquincies, credit inquiries and DTI are also not included in these tables.

As Mike has calculated, the revenue Prosper.com earned in August was $118,000. No figures on the cost structure of Prosper's operations are available.

MyC4 introduced "automatic bidding", an automatic bidding assistant that will bid on any new loan listings that match parameters set by the lender. Similar to the Standing Orders feature of Prosper.com, but not with as many selection criteria.
Mads Kjaer, CEO of MyC4, said:

The Auto Bid request came from several of the businesses we have talked with and also several Builders who asked for a quick way of get going.

You could say that this feature is also the preparation for e.g. philantrophy funds or bi-lateral organisations who want to use My4 to reach micro entrepeneurs in Africa at NO COST = 100.000 credits is 100.000 credits invested …

MyC4 now also enables the use of Paypal to transfer money into the MyC4 account. 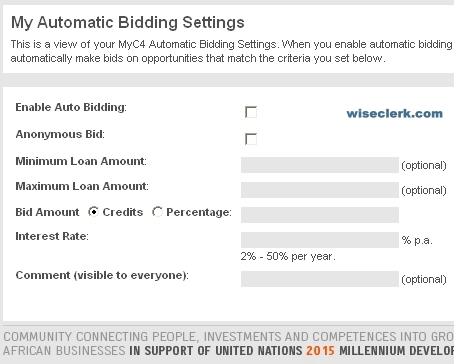 After a great traffic surge due to media coverage in The Today Show and The Oprah Winfrey Show new lenders funded loans faster then Kiva.org could list new ones. When Kiva reached nearly 1 million page views per day it was completly sold out temporarily. Right now there some loan listings, but Kiva limited bidding to $25 per lender.

My 20 Kiva loans are all paying on time so far. 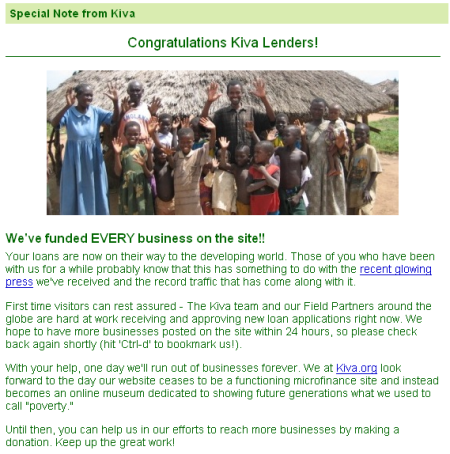 Prosper.com announced that it will discontinue group fees in the near future for all new loans. Group fees, also called Group leader rewards or Group rewards allowed the group leader to charge a fee that is payed by borrowers with loans in this group.

At Prosper, we have been listening to your feedback regarding groups and group leader rewards.

The original philosophy behind Prosper Groups was to enable borrowers in close-knit communities to leverage the reputation and peer pressure of their group to attract more bids from lenders, resulting in potentially lower interest rates for borrowers, and lower default rates for lenders. We have found, after nearly two years of experience, that the strongest groups are comprised of close networks of friends and associates, where compensation is not the dominant motivation for the group leader’s services.

We hope this change will encourage group leaders to grow their groups by inviting new members from their pre-existing social networks, turning Prosper Groups into a more powerful community development tool and making Prosper simpler for both borrowers and lenders.

Thank you for helping us become the Internet’s leading community lending site.

The original idea of the Prosper groups was, that social connections, that already existed offline, would be replicated within the Prosper group structure.
But most groups evolved online only with no previous offline connections between the members. The (the lack of) value of the groups for the Prosper concept has been discussed repeatedly in the Prosper forum. While some group leaders did a good job screening and vetting borrower applications and the group leader could be seen as a compensation for time invested; the majority of lenders seems to see the removal of group fees as a step in the right direction.