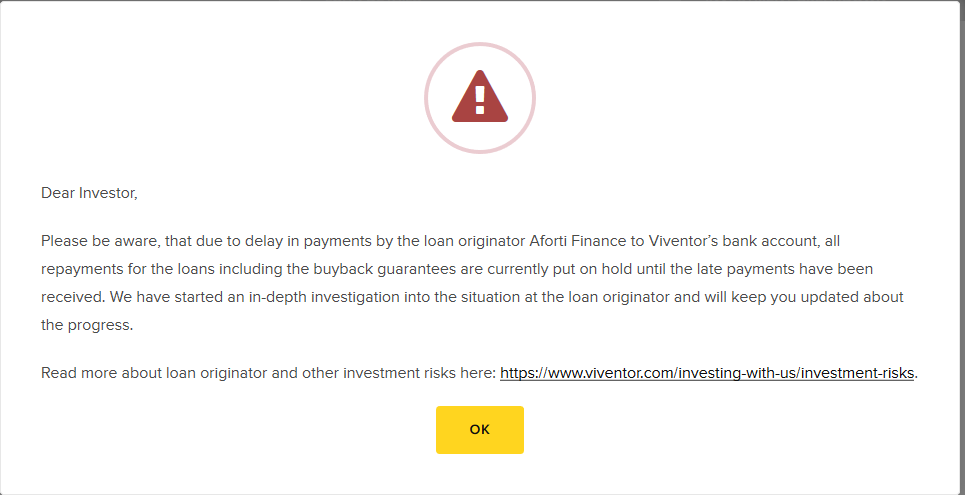 Thank you for your email.Aforti is overdue on passing to Mintos payments which Aforti has received from borrowers and payment for buybacks. Thus, we are suspending repayments and buybacks. We are meeting Aforti tomorrow in Warsaw and will update investors accordingly. Below excerpt from communication to all investors:
Mintos has suspended automatic repayments and buybacks for loans originated by Aforti Finance on our marketplace (EUR and PLN).
The decision was made based on Aforti Financeâ€™s overdue transfers of borrowerâ€™s payments to the Mintos marketplace.

We are currently at the stage of closing cooperation with the Viventor platform, what has been announced to Viventor. Situation suggested by Viventor is a resultÂ  ofÂ  change in Aforti Finance S.A business strategy. Our decision is determined by technical difficulties in cooperation withÂ  Viventor platform. Also cause most workload has to be done manually, our operational risk increased significantly. This is what we want to avoid, cause AFORTI business model and operational procedures are going rather in the direction of using API to automatize processes and to minimize human errors.

Itâ€™s also worth to add, that we have not been usingÂ  Viventor platform for new loans for about two last months, as a result of mentioned above decision. Of course Viventor receives daily financial transfers, so we do not see any reason for such a message.

Our team is once again meeting with Aforti Finance in Warsaw, Poland today to continue to work out the details of last weekâ€™s initiated solution for Aforti Finance to resume transferring borrower repayments to us for distribution among investors.

We also wish to remind that Aforti Finance has not been placing loans on the Mintos primary market since January 2019. It was a mutual agreement with Aforti Finance following a weaker than expected loan performance and IT system related issues. Aforti Finance has continued servicing the loans since then and the total Aforti outstanding loan portfolio on the Mintos marketplace has decreased from EUR 5.7 million on December 31, 2018 to current EUR 2.2 million as of August 12, 2019. In light of adverse changes in the mood on the Polish securitization and bond market as well as our due diligence insights on the companyâ€™s internal arrangements changes, we reflected our risk precautions by downgrading Aforti to C+ in March 2019.

As reported in the past MYC4.com has serious operational problems making it an investment with negative ROI for the vast majority of lenders. MYC4 has taken measures to recover as much of the outstanding loan amounts as possible, but progress is veryÂ slow.

This is a quick update on the situation

Kenya / Provider Ebony:
The receivership has been in place for two months now, but has recovered only a small amount. The court case against Ebony Capital Ltd. is ongoing still awaiting a ruling. (see details)

Ivory Coast / Former providers Ivoire Credit and Notre Nation
The responsibility for collecting these loans has been turned over to TRIUM International in September 2009. In the 5 months since then TRIUM International collected 17,848 Euro. TRIUM has asked to be relieved of the contract as soon as possible (see details)

Uganda / Provider FED/CMC
FED seems to have the worst status. MYC4 reports that collections nearly stopped due to a lack of staff andÂ  working capital. Borrowers are said towithhold repayments in speculation on a collapse of FED/CMC.
MYC4 has defined 10 action steps for March and April. (see details)

END_OF_DOCUMENT_TOKEN_TO_BE_REPLACED

In the Netherlands p2p lending service Boober apparently has ceased operations. The website Boober.nl has been inaccessible for days and no one was available for comment as the phone went unanswered.

There are reports by lenders, who complain that loans are not serviced as usual. Even one borrower is seeking help, because he cannot get the monthly payment through to Boober.

As of the moment it was not possible to determine how outstanding loans will be dealt with.

MyC4's staff has been quick to respond to the problems and usually is fixing them fast.
But I believe the issue here is, that p2p lending through a foreign internet startup requires a great amount of trust. And while lenders are used to bugs in new internet application, they do expect a high standard when it comes to accounting. After all no user of online banking would accept that he has to check the interest calculations made by the bank.

The MyC4 team did a good job developing the platform so far and earned at lot of trust; but if the problems persists this might be an obstacle to further growth.

Browsing the Zopa forums today, I noticed that negative posts by lenders are on the rise. This is quite different from the mostly positive feedback in earlier months.

While the staff in many cases does not immeadiately solve the voiced problems, at least they are much more responsive in the forum compared to the Prosper staff in the Prosper forum.

Some of the complaints may turn out to be misunderstandings. Bear in mind, that only a tiny minority of the Zopa lenders are active posters in the Zopa forum, therefore it is quite possible that a fast majority of Zopa's lenders is still very satisfied with the service.

Users suspect problems may have risen, because Zopa stuff could be tied up with issues concerning US launch.

Since two days the status field for the loans in the xml file of the Prosper data export is empty. Unfortunately this causes problems in some of the wiseclerk reports, which either show wrong values or are empty (e.g. the late loan list). For newly created or update maps the status of the loans is wrong, too.

Be assured that the reports will work fine again, once the the data export file contains correct values again.