I am looking forward to attending the P2P Conference 2020*, which takes places in Riga on June 19th/20th. If you want to go too, you can order your tickets using this link P2P Conference 2020* together with code Claus for 20% discount (click on ‘enter promo code’ on the page where you enter the ticket quantity).

I went to the conference last year and enjoyed it. You can read my article about it here.

This year I plan to arrive a few days earlier (on the 16th) in Riga, using the time to meet up with platform representives. I also plan to organize a lunch or dinner meetup for P2P-Banking readers so we can chat and discuss current p2p lending developments. If you are interested send me an email and I’ll inform you once the planning is further advanced. 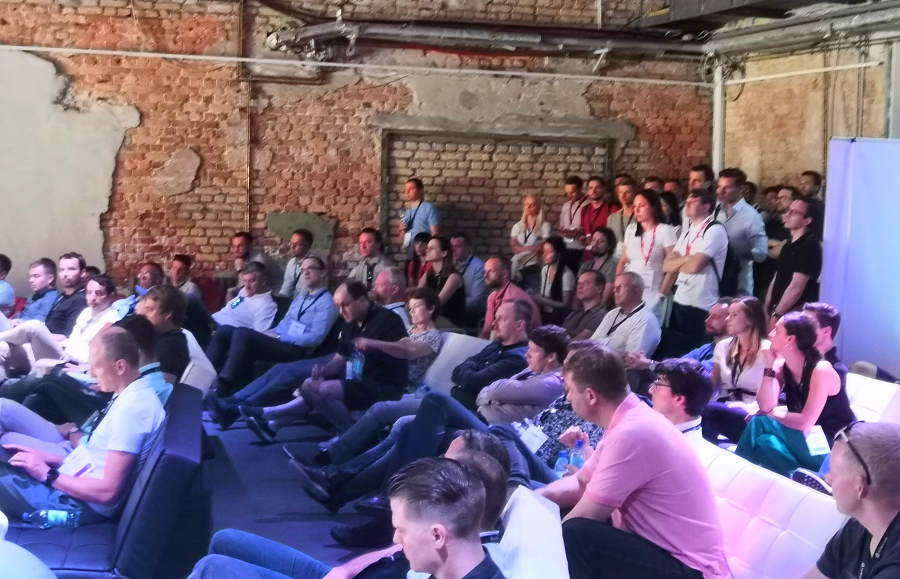 
For other events see the Events section.

The website is down. Several investors voiced complaints on Facebook, Twitter and forums, about not receiving withdrawals within 5 working days, the time-span that the company used to tell investors is the normal processing time. Social media profiles of several management members were deleted today. The European Crowdfunding Network reported them to authorities after receiving multiple investor complaints.

The platform Envestio was launched in spring 2018 and promoted business loans of a wide variety of types (crypto, real estate, working capital, …). Founded by management with Latvian origins the platform was officially run by Envestio SI OÜ, a company registered in Estonia. Business loans (not consumer loans!) are currently not subject to specific regulations in Estonia.

Initially most of the offered projects came with loan sizes of 100K EUR to 300K EUR, but recently offered projects got much bigger. Offered interest rates where high, often around 20%. Shortly after the start, Envestio started to offer a ‘buyback guarantee’ (later renamed ‘Repurchase Guarantee‘) under which it would repurchase loans prematurely for a fee of 5% should the user request it.

To date Envestio seems to have collected around 33M EUR of investor money from about 13,000 investors throughout Europe (number according to Envestio website before it went down). Analysing web traffic, which probably correlates to investments, I would estimate that most of the investors came from Italy, Denmark, Spain, Germany and Portugal.

All seemed to go well for Envestio. Certainly the investments looked extremly high risk. I never invested as it was way beyond my risk appetite, but nobody suspected a scam.

In summer 2019 the company announced it was sold to a new owner.

Then there were allegations from an anonymous Twitter account (@RPeerduck, meanwhile deleted), published on Dec. 18th 2019. These linked the new Envestio COO to fraudulent promotions for an investment scam years ago. I asked the Envestio management for comment and received an email explanation on Dec. 20th, 2019, in which the COO said ‘… At the same time, the only personal experience in this sphere that I have is making a presentation of crypto-project, management of which was able to prove that their company can be trusted and does not have any signs of scam at the moment of making this presentation.. ‘. I did not find the offered explanation convincing at all.

Combine that with a media article in the Latvian press where a team member of Envestio was accused of misconduct in a former job (she denied any responsibility or misconduct), that left me wondering if Envestio is complying with all legal obligations.

All these bits of information were discussed on various forums. Nevertheless many investors seemed undeterred. As late as yesterday many investors on Facebook were defending Envestio’s arguments. The last one was a DDOS attack by hackers that disrupted the service.

The last withdrawals payouts that users actually received according to investor postings, were requested on or before the morning of January, 12th.

The last statement Envestio published on its Facebook page yesterday reads ‘…Simultaneously with the recent concerns within the industry, we tracked repeatedly various technical attempts targeted to influence dramatically on stability of Envestio platform. They were performed through hacker attacks on our web site and platform’s internal structure and database.

At the same time, we noticed that destructive public relations campaign against Envestio has been initiated and which consisted of spreading knowingly false and unconfirmed information by numerous internet resources questioning financial stability and reliability of our platform, denigrating the reputation of the Envestio owners and key employees.

We tend to consider these attempts as a consistent and well-planned set of actions aimed to cause significant financial and reputational damage, as a result of which the Envestio platform should inevitably begin to experience substantial difficulties with current payments to its investors.

We assume that the ultimate goal of all these actions is to devalue overall Envestio’s business, and the subsequent potential raider takeover of the company or an attempt to eliminate the company from the industry, getting rid of as strong competitor. The implementation of the aforementioned scenario is evidenced by a number of factors and hostile actions that occurred precisely at the moment when a serious crisis of confidence reigned in the crowdfunding market and which actually was caused by the scandal surrounding the activities of the Kuetzal platform. …’

What options of actions do investors have?

Investors believing that they are victim of a fraud could complain to the authorities e.g. the Estonian police, email ppa@politsei.ee . Clearly state what you are complaining about, provide documents, state your identity. I reached out to the press department of the police today, but have not yet heard back from them.

Investors could also elect to have a lawyer represent their interests.

EDIT: 23.01.: One team member posted claiming innocence/not knowing what was going on (I have no means to verify if the post is really from the person with that name)

EDIT: 23.01., 14:50: Statement from a press officer of the Estonian police in response to the inquiry of P2P-Banking: : ‘In the past few days, the Estonian police have received several complaints regarding the crowdfunding platform Envestio. We are currently working to specify all details, but there is no investigation underway. However, if signs of crime do surface, we will start an investigation.Head of the Fraud and Economic Crime Division of North Prefecture Juhan Ojasoo: „Not every unsuccessful investment is fraud, however, if one really believes they have been deceived, we encourage to get in touch with us.“

A statement can also be submitted via e-mailing ppa@politsei.ee and describing the case in as much detail as possible. We ask to provide contact details, amount of money lost, dates for transacations etc.

We also advise checking the Estonian Financial Supervision and Resolution Authority website for alerts prior to investing in any company: https://fi.ee/en/alerts.’

EDIT 24.01., 14:59 There are serious concerns (source) too, regarding the Estonian platform Monethera. Monethera has claimed a relationship in the past with Richly Pacific International Ltd, from Hong Kong, register number 1543697. A search in the document register shows that this company was dissolved in December 2018 already. EDIT 24.01. 21.32: Monthera stated ‘It’s a mistake and we already contacted Hong Kong companies register’

EDIT: 24.01. 17:35 Further concerns surfaced about Wisefund, a company with a model that has similarities to Monethera. An investor claimed a borrower listed on Wisefund denies having asked for a loan . There is a statement that Wisefund gave to another investor as an explanation, which does not convince me personally. You can read about this here.

EDIT 24.01. 18:03: J. V. (name shortened) on FB has shown a direct connection between a team member on Monethera and Envestio. The team member owns 50% of the sponsor Baltic Real Estate Holding (Barona 72 sponsor) which was a project on Envestio.

EDIT: 29.01.: 15.23: Update by Estonia police to P2P-Banking.com:  ‘This week Estonian police began a criminal investigation regarding Envestio. The case is being investigated as investment fraud.‘

Head of Economic Crime Bureau of Central Criminal Police Leho Laur told P2P-Banking: ‘We have received a large number of appeals from people who have invested into the crowdfunding platform Envestio. Majority of the appeals are from people outside of Estonia. We are currently working through the statements received and communicating with other Estonian investigative organisations, who have also received complaints regarding Envestio. We know that the number of people who have put their money into Envestio is even larger, thus, we are likely to receive more complaints.

Our first objective in the investigation is to find out wheter it was fraud and the platform was created with the purpose of deceiving people or the website was closed due to a bad investment. It is also important to identify the people connected to this company and determine, wheter the crime was committed in Estonia or elsewhere. This is an investigation that has many parties and we will be cooperating internationally as well.

Most active crowdfunding platforms are trustforthy, but we recommed to always check where you are placing your money.‘

State prosecutor Sigrid Nurm told P2P-Banking: ‘Before investing into a company, it is necessary to do some background work and check where exactly the money will be placed. A promise of a high return and claimed amount of people involved or money invested, should not be viewed as guarantees. We recommend to look past advertisements, social media posts and websites, and to look into the background of the company in more depth. Look into open source registries, consult with your home bank or a local Financial Market Supervision Authority. It is also important to remember that every investment carries a risk and losing money does not necessarily mean that it was fraud.

A statement can be submitted by e-mailing ppa@politsei.ee and describing the case in as much detail as possible. We ask to provide contact details, amount of money lost, dates for transacations, description of what happened etc.

Currently we have no reason to believe that the two platforms, Kuetzal and Envestio are connected.‘

EDIT 29.01., 21:48.: After looking at documents compiled by Envestio investors on Facebook regarding the status of individual loans I believe the potential damage caused by Envestio is closer to about 22 million EUR (plus uninvested cash lying in accounts) This is because at least 13.98 million EUR loans are in the status ‘repaid’ I assume that investors mostly reinvested (or withdrew) that money. While the 22 millions are lower than the 33 million EUR mentioned at the top of the article, it is still a huge amount.

EDIT: 02.02.: According to a press article, Latvian police have not opened an investigation but promises to support Estonian police if necessary

The table lists the loan originations of p2p lending marketplaces for last month. Mintos* leads ahead of Ratesetter* and Zopa. The total volume for the reported marketplaces in the table adds up to 594 million Euro. I track the development of p2p lending volumes for many markets. Since I already have most of the data on file, I can publish statistics on the monthly loan originations for selected p2p lending platforms. This month I added Boldyield*. I removed Landbay (institutional only now) and Lending Works (monthly data not available anymore). 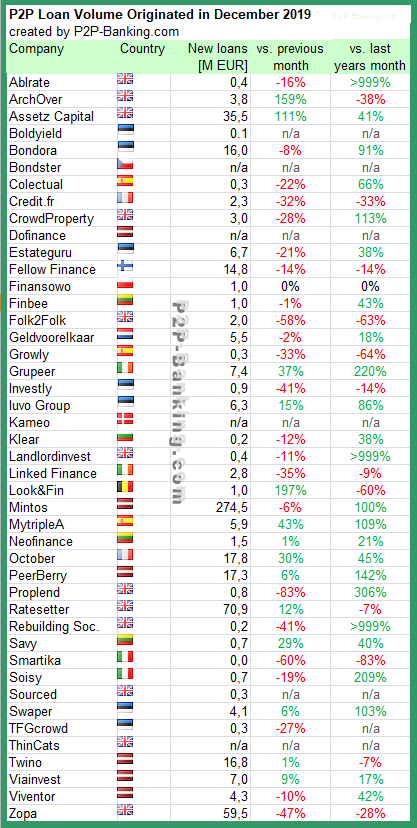