On the statistics page the link to download the loan data was removed. Before it was possible to download the complete loan data since inception of the service. Furthermore the predefined setting for the parameter “Loans issued from” is set on March 1,2008 now. That means, if you look on the page and do not change that parameter manually you see how loans performed that were issued between March 1, 2008 and today. Older loans issued between June 1, 2007 and Feb 29, 2008 are not included in the displayed results.

When I noticed that, I was reminded of what Prosper did with it’s statistics. Prosper segmented it’s loans (e.g. prosper select index) and cited only results for better performing segments in press releases. Furthermore the predefined values on Prosper’s statistic page, were set in a way that lowered the late payments and default ratios compared to an average over all Prosper loans.

But Lending Club had successfully positioned itself with transparency a core value in the past, so I asked Lending Club to comment on the reasons for the changes.

This is a temporary situation. We chose to take down the files due to privacy concerns raised by our customers. We are working to address these concerns in a way that continues to provide full transparency to platform data, while protecting the privacy of our customers….

On the setting of the parameter he stated:

The default setting for the statistics page is a year. So since we are now in March, the “From” date is defaulted to March 2008. This is to show the most relevant annualized indicators for the last year. Users can then change the “From” and “To” dates to explore the indicators for a specific time frame they may be interested in, including from inception (June 1, 2007). We did this based on numerous email inquiries from lenders asking for annual default rates instead of a general default rate since inception (so that they can compare annual defaults to annual interest rates to get actual net returns). We’re looking at tools to make that calculation easier…

Yesterday Lazy Man wrote about his observations on how Lending Club reports risk. The posted screenshots show that interpretation of the risk figures is not obvious under certain circumstances.

When analysing numbers on p2p lending activity, users can rely on independent third party sites gathering statistics for many p2p lending services. These services either obtain the raw data via an interface provided by the service or they do parse the web pages of the service to collect the data.

Most of the statistic sites offer reports and tools to analyse and graph the overall development of the marketplace as well as the status of an individual lender’s investments.

The majority of the users are lenders, as the borrower usually needs the information only once – before applying for a loan – to determine what interest rate is appropriate.

Feel free to copy this list, but please do set a link citing this page as source. If you know another social lending / p2p lending stats site, please let me know.

Long term readers may remember that the Wiseclerk.com domain initially started as a report site on Prosper.com. It was in fact together with Savagenumber.com the first service of this kind.

*public launch; there was a 2 month period before, that was open by invitation only since Nov. 14th

MyC4.com accelerated growth during the past month. This is shown by stats on MyC4Stats.com (provided by Wiseclerk.com) showing the loan volume by origination month. Compared to earlier months the loan volume rose sharply in December and January. In December 150,000 Euro loans and in January 250,000 Euro loans were disbursed to African entrepreneurs. 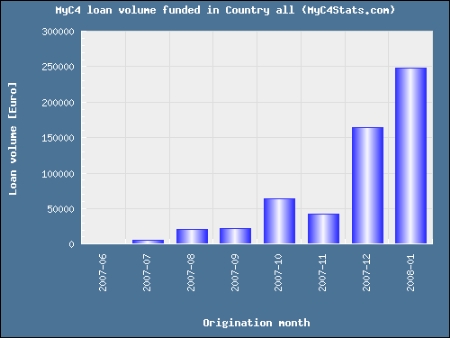 The new MyC4Stats page offers reports helping lenders to find open MyC4 loan listings with the best rates. At MyC4 – unlike at Prosper – every lender funds a loan at his individual interest rate. In fact 50 different lenders funding one specific loan may each earn different, self-set interest rates. While MyC4 sets a maximum for the weighted average interest rate for each loan, it is still possible for an individual lender to bid higher and earn more after funding.

How to find the best loans?

To select the loans with the best rates for bidding in the listing phase a quick overview of available listings sorted by the maximum possible interest rates that can be bid, is important. Several tables on MyC4Stats help lenders on this. Sample screenshot: 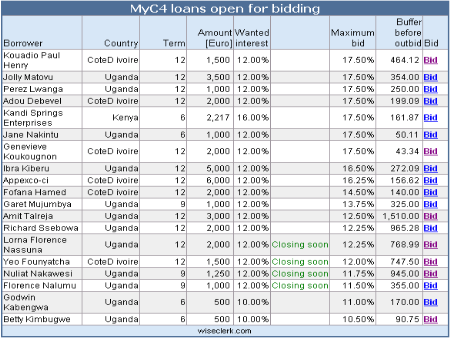 The report presents the listings sorted by maximum interest rate (column Maximum bid) that can be bid and states the Euro amount above this rate that serves as a buffer before being outbid. The buffer is caused by the rule that new bids must always be place at least 0.5% lower then the current high bid.

Lendingclub.com now enables members to be a borrower AND a lender. Borrowers can have multiple loans, credit policy guidelines permitting. Lendingclub also added a Q&A feature and improved statistics. The new referral program enables this offer: