For the coming Lending Club IPO a recent SEC filing reveals details on the valuation of the company.

After the IPO there will be 361,111,491 shares of common stock outstanding at Lending Club so at 12 US$ per share this will result in a 4.33 US$ billion valuation. Read more details on Lend Academy. 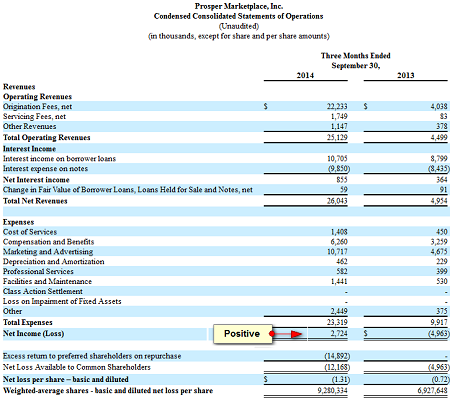 Loanio has filed a S-1 registration with the SEC. P2P lending service Loanio had been briefly active in October and November last year before voluntarily closing to new users in order to seek SEC registration approval.

In the new SEC filing Loanio wants approval for offering 50 million US$ in notes based on peer to peer loans via their website Loanio.com. The filing includes the outlook for a secondary market (loan trading platform via a broker) and the plan that Loanio might partner with a “national financial institution”. Should that be achieved, borrower loans could be originated through this lending institution and then sold and assigned to Loanio. This would allow Loanio to offer loans to borrowers in more than the 22 states it has individual state lending licenses for now, and would eliminate (some) state interest caps.

The filing also gives insights into the company structure and expenses since foundation. Founder Michael Solomon hold 97% of the company shares.

Under the requirement to file with the SEC, starting a peer-to-peer lending company in the US market takes an unusual long pre-launch phase compared to other internet based business models.

The SEC cease and desist order against Prosper offered the legal arguments on a plate, now the first class action lawsuit filed against Prosper Marketplace Inc. uses the SEC filing as exhibit A to state it’s case. Regarding numbers and affected lenders the lawsuit by The Rosen Law Firm, New York, states

“…As of October, 2008 approx. $21.7 million of loan notes purchased by Class Action members have become worthless because the borrowers did not pay the loans to Prosper. Additional loan notes will become worthless as more loans are charged off as uncollectible.
…
there are tens of thousands, and perhaps hundreds of thousands of, loan note purchasers that are class action members…”

Prosper is required to file a written response within 30 days. The first court date is set for May 1st, 2009.

On the same issue – selling unregistered securities – but in an otherwise unrelated case Prosper agreed to pay a 1 million US$ fine in a settlement to the states to avoid individual states suing against Prosper. More information on that in the press release of the North American Securities Administrators Association (NASAA).
This is somewhat surprising to me as Prosper did obtain licenses in over 25 states and conducted lending under those, before it switched to the model using the WebBank. (see ‘Prosper riding the state-by-state roller coaster‘ and ‘Prosper goes national with 36 percent max interest rate‘). The same states that granted the licenses now wanting to sue Prosper?

Last week Zopa’s CEO Giles Andrews commented that regulation issue were the reason why Zopa did not use it’s UK model when it entered the US market.

While Lending Club has completed SEC registration and therefore is in compliance with the rules of the SEC, it might still face some risks. An article of the Oregonian on the NASAA settlement states:

In a SEC filing of yesterday, the SEC has ordered Prosper to cease and desist. On page two it states that

The loan notes issued by Prosper pursuant to this platform are securities and Prosper, from approximately January 2006 through October 14, 2008, violated Sections 5(a) and (c) of the Securities Act, which prohibit the offer or sale of securities without an effective registration statement or a valid exemption from registration.

So far Prosper has not commented on the situation.

Asked by Netbanker whether Loanio.com will face an SEC filing process and a quiet period like Prosper and Lending Club, Loanio CEO Michael Solomon answered:

“…from the perspective of (Prosper) going silent, it is actually great for us as I think we will quickly gain lots of lenders and hopefully we can wow them into sticking around. From a regulatory standpoint, we believe that at some point we will seek to introduce a secondary market platform, but we will focus the greater part of the next 12 month on building our platform and seeking out a national bank partner to cover the rest of the U.S. Our plans for a secondary market are too far ahead for me to contemplate at this time.”