Exactly 4 months ago I deposited money at Saving Stream and started lending. Saving Stream is a UK p2p lending marketplace operated by Lendy Ltd. that facilitates bridging loans, that is short-term loans for typically less than a year, secured by commercial property. Investors can see valuation documents for each listed loan. Saving Stream operates since January 2013 and with 25 million GBP loan volume originated since launch it is one of the mid-sized p2p lending sites in the UK.

Saving Stream is open to international investors; you don’t have to be a UK resident. Investors are paid 12% interest, accumulating starting at the day they bid on a loan. The interest is paid monthly (starting with drawdown); the principal amount is repaid at the end of the loan term. Saving Stream does not charge investors any fees.

Since I don’t have a UK bank account I used Transferwise when depositing money in order to save on bank fees. For larger amounts (approx. >1,000 EUR) it might be even more efficient to use Currencyfair so check that too.

Some of the smaller loans (e.g. 200,000 GBP) fill within hours of coming onto the marketplace. I do like that I can deposit money (Cashier>Deposit>Step 1) and bid with this money without having to actually wait for the money to arrive (which usually took 1-3 days with Transferwise). 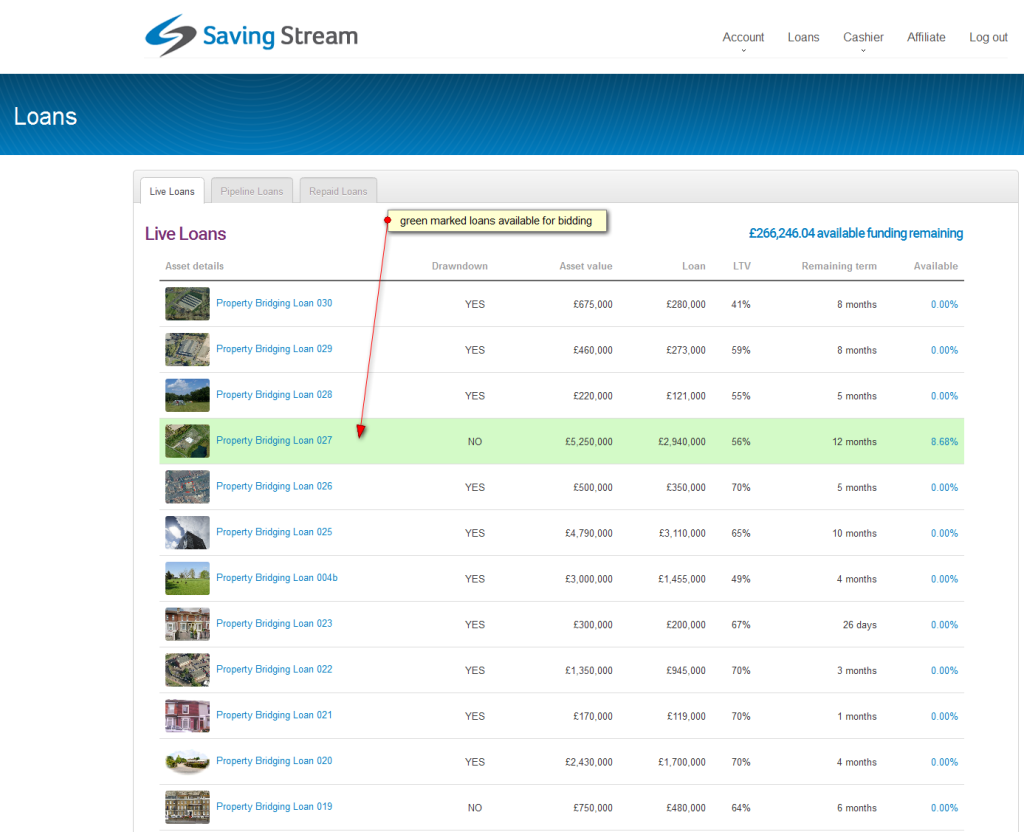 The Saving Stream p2p lending marketplace is very simplistic and easy to handle. There is a view of the live loans. Only the green ones have amounts open for bidding. The secondary market does not have a seperate view but is integrated into the live loans view. There are no fees and markups/discounts when buying and selling on the secondary market. So when a loan part is listed for sale, the amount is just added to the available amount for this loan. END_OF_DOCUMENT_TOKEN_TO_BE_REPLACED

This is a guest post by British investor ‘JamesFrance‘.

Since retiring and leaving the UK to live in a warmer dryer part of Europe, I fortunately found myself able to live on less than my income, so had the problem of how to best manage these savings, which I wanted to protect from inflation and if possible achieve a positive return on by some type of short term investment. Unfortunately I never found a British savings account which would accept money from non residents, so I was obliged to accept a very low interest rate from my existing UK bank. I do have other long term investments so was prepared to take some risk to achieve a better return.

I had seen articles in the British press about Peer to Peer lending, which tended to refer to the big three, Zopa, Ratesetter and Funding Circle, none of which were prepared to allow a non resident to open an account, so I soon forgot about that as a possibility.   In August 2013 I read that another P2P business lending platform, Thincats, was joining the P2P finance association. I decided to look at their website and was surprised to learn that they could accept non resident investors.

Thincats is really for those with larger amounts to invest, having a minimum bid of 1000 GBP per loan, so it is difficult to achieve adequate diversification for relatively small sums without using their syndicates, which I didn’t find interesting, so I took the plunge and made 10 loans.   Needing 1000 GBP per loan meant that after that it took me some time to accumulate enough for my next bid, so I had the problem of uninvested money not earning until my next loan drew down.   I also found that some loans were repaid early which was reducing my returns because of the drawdown delays.   I think this would be an ideal platform for those with large amounts to invest, as they have a good flow of loans, there is plenty of information about the borrowing companies and once their new website is launched the process should be much easier.   A minimum 25 GBP fee for selling a loan on the secondary market makes it expensive to sell smaller amounts, which means that after several repayments a sale would not be economic.

By this time I was finding other possibilities with the help of websites such as P2P-Banking.com, where I read about isePankur in Estonia, which has an English language version and seemed ideal for any spare Euros languishing in my Euro account and only earning a secure 1% interest. isePankur now renamed Bondora, has been quite exciting to invest through as there have been many changes to the auto bidding system since I started there in September 2013, so just as I became used to the way my chioices were working out, it was all change so I had to start again to think of a good strategy.   They have been expanding rapidly and now issue personal loans in 4 European markets.   The defaut rates for their Spanish and Slovakian loans have been very high, so I have been avoiding those areas since that became apparent, which means time consuming manual investment because the auto bid system no longer allows choice of country.   I do not sell overdue loans on the secondary market, so my returns on the platform will be completely dependent on the eventual recovery of the defaulted loans, which will only become apparent after a few years.   The interest rates are high so I have accepted the level of risk involved. END_OF_DOCUMENT_TOKEN_TO_BE_REPLACED