Today secured by property p2p lending marketplace Landbay launches its Innovative Finance ISA (IFISA). The IF ISA offer carries an interest rate of 3,69%. The minimum investment amount for this product offer at Landbay is 5,000 GBP. There is no account opening fees, no ongoing fees and no transfer-in fee. There is a 50 GBP transfer-out fee.

Investors can make use of the current annual taxâ€free ISA allowance of 15,240 GBP. In the next tax year the allowance will rise to 20,000 GBP.

Since then it has been very interesting journey. I watched how Landbay fared, saw them grow the marketplace substantially. There have been subsequent following rounds into which I invested again. Shares issued through Seedrs come with pre-emption rights, that means I am entitled (but not obliged) to invest in next rounds to avoid dilution of my share percentage.

Currently Landbay is pitching to raise 1M GBP at a pre-money valuation of 10.3M GBP. You can see the current pitch here. The shares are priced at 85 GBP, that is the minimum investment amount (normally most Seedrs pitches come with a minimum investment of just 10 GBP). At the time of this writing the pitch is already filled 91%. Before it opened for public bidding recently, it was only accessible for existing shareholders like me to enable them to execute their pre-emption rights. I am not sure the pitch will allow overfunding.

Last week Landbay announced that they received an investment from Zoopla. Zoopla is a company that operates property sites uSwitch and Prime Location. Â Zoopla announced full year results (ending September 20, 2015) showing a revenue increase of 34% as the top line number jumped to Â£107.6 million. Profit for the year increased 20% to Â£25.4 million. Â The partnership with Landbay is designed to help scale their retail customer base as the P2P lender becomes a more established mortgage lender.While the precise amount of the investment into Landbay was not disclosed, Zoopla invested into a total of 4 companies and the total for that was 1M GBP. This deal will also trigger previous convertible rounds that Landbay did on Seedrs.

If you are interested in the pitch you don’t need to be a UK resident. Just sign up at Seedrs and follow the process. If you are outside of the UK, I recommend considering to use Transferwise or Currencyfair, when depositing money in order to reduce currency transfer fees significantly. If you are a UK resident, note that the pitch is EIS eligible. 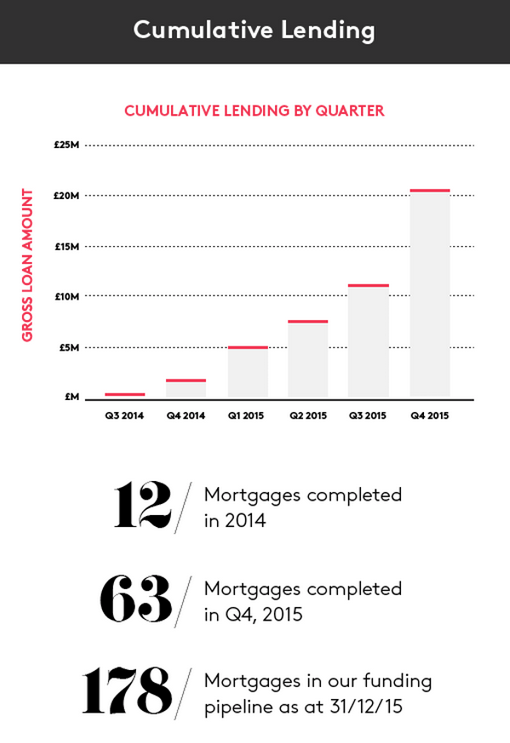 Since then the founders John Goodall and Gray Stern have been busy. They launched the site in public beta, succeeded in winning former Zopa co-founder James Alexander for their advisory board and managed to get featured on Techcrunch.

They also kept investors updated about their progress. A few days ago I got a 21 page report about the current state and future plans.

Now Landbay is raising a second round from the crowd

Landbay raised capital in a few hours on the weekend in a second SEIS eligible round on Seedrs from the existing shareholders. Landbay raised 81,647 GBP for a 6% equity stake. That’s a valuation of 1.28M GBP (up from 0.62M GBP in first round). To avoid dilution investors from the first round had the right to invest into this new round first.