P2P lending holds great promise: more transparency, purposeful direction of investments and economic advantages for borrowers and lenders. Some even talk of democratization of financial processes.

But are advantages and risks evenly balanced between borrowers and lenders?

For the borrower p2p lending fulfills most promises and the only risk is that the desired loan goes unfunded. Most services have a simple fee structure with no hidden fees and the borrower only pays fees when he does receive the wanted loan. And within a time frame of a few weeks after sign-up the borrower reaches his goal – once his loan is funded and the money is transferred to his account. Platforms with auction mechanisms can even benefit the borrower further in supplying the loan at a lower interest rate then the maximum he set.

The lender on the other side is promised an attractive return on investment but faces multiple risks:

The lending experience of the lender is further hindered by the timeline. The problems may impact him at any point in time of a several year loan term. And he either has no way to terminate his investment immediately or if there is a secondary market he might be only able to do so by accepting economic disadvantages in return for the option to selling off.

The situation of the lenders in this comparison to the borrowers is worsened by the alignment of interests of the p2p lending service company with the borrowers. This is due to several factors:

This imparity results in different levels of satisfaction with the p2p lending service for lenders and borrowers. While those p2p lending services that offer (unmoderated) discussion forums have only few unsatisfied borrowers voicing their opinion (and then mostly on technical issues) lender concern and critic rises over time on some of these services (to the extend that Prosper even deleted it’s forum at one point in time).

END_OF_DOCUMENT_TOKEN_TO_BE_REPLACED

Globefunder is now open for loan request by borrowers (minimum credit score of 640 required). The signup for individual lenders at Globefunder is still "coming soon".

Interest rates for borrowers on GlobeFunder range from 8 percent to 20 percent. GlobeFunder makes its money by charging a onetime 1.75 percent fee to borrowers on their loans, and charging lenders 50 to 100 basis points of their investment over the 24- to 60-month loan term, Decio said.

A basis point is one-100th of a percent.

When analysing Prosper.com data it is possible to find out all kind of things. E.g if there are regional differences to how talkative Prosper borrowers are when writing listings.

Prosper's most talkative borrowers live in: 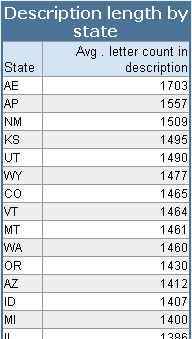 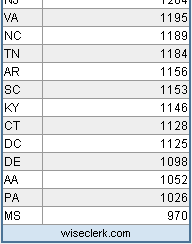 Now, while that was fun, it is not really useful in any way or is it?

When looking at the length of funded listings, that became loans, by credit grade it gets more interesting. 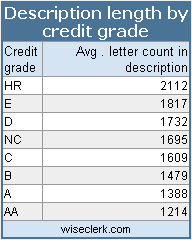 Apparently the lower the credit grade the more detailed the description has to be to convince the lenders to bid to fund the loan.

Looking at the development of the description length of funded Prosper listings on the time scale  this chart is the result: 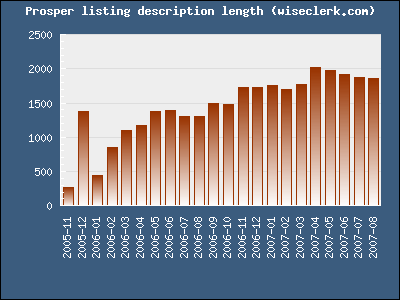 There are several possible causes that contribute to listings getting lenghtier:

Yesterday the new lender signatures were introduced by wiseclerk.com. Based on an idea from  nonattender this new tool allows to transform key lender stats figures into an image, which can be used in a posters signature at the prosper forum.

Example of the image (size decreased, original is larger):

The image shows the amount invested, the current number of loans, the roles and, if the lender is in the top 500 the rank by money invested.

Once created the images will update daily automatically.

The discussion thread on this new tool was a hot topic. After several suggestions, a couple of hours later a further signature tool, this time for the borrowers was offered.

We will see how this further develops.