Finally! We all long waited for a genuine P2P lending service in France.

FriendsClear launched on February the first a platform that enables small businesses to advertise their projects and ask for a loan up to 15,000 Euro.

Lenders can then apply for the loan for an amount between 1,000 and 3,000 Euro. If a project is validated, once it receives enough loans propositions.

The rates are fixed to 5% for the lender and 6.25% for the borrower. The spread finances the platform and their Bank partner: CrÃ©dit Agricole.

To ensure the seriousness of the projects, it costs 15 Euro to advertise a project. Most of the project information is only available to registered lenders.

To launch this service, FriendsClear organized a project contest. After the public vote (over 10000 votes), a jury will choose the best project between the five finalists. The winner will be rewarded by a prize of 10,000 Euro.

This enables serious business growth for the small startup FriendsClear. In order to support it, they recently raised new funds and it seems that they are looking for new co-workers on this project â€“ but I coulnâ€™t find precise information on their recruitment needs.

This is very encouraging sign for finance 2.0 in France, and we believe that more will follow soon, from other actors but also from FriendsClear, which have many projects for the future (P2P for individuals, open a branch in another European country).

An interview of Friendsclear founder Jean-Christophe Capelli [in French]

For this occasion, Friendsclear organizes a project contest:

– everybody can submit a professional project

– the public can vote for the best project

– the project which gets the most support will win 10kâ‚¬ 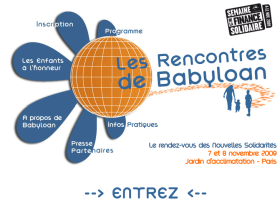 November is, traditionally, in France the Month of Solidarity and social economy, and one week is dedicated to finance.

On this occasion, the French micro-credit organization Babyloan, is organizing an event November 7th and 8th in Paris.

Come and meet the team !