Lendit Europe time of the year again. My fourth time as a particpant of the London conference. It is now marketed as an ‘Event for Innovation in Financial Services’ and that means a wider scope of topics – and presenting companies – than in earlier years, when it had a single focus on p2p lending / marketplace lending. I truly enjoyed the conference, it had quality sessions and its high level attendants (more than 1100) allow great networking and making interesting contacts.

In writing this recap I find it much harder than in previous years to identify the main trends/topic that were discussed. There has been no single big announcement or issue happening that dominated the talks. So I’ll start with 3 predictions Renaud Laplanche, CEO Upgrade made in his motivating outlook on Online Lending 2.0:

From my viewpoint the first prediction is the one with the highest probability to come true, the second one is mainly important for the US market and it is actually the third one that is most interesting (but also most open). 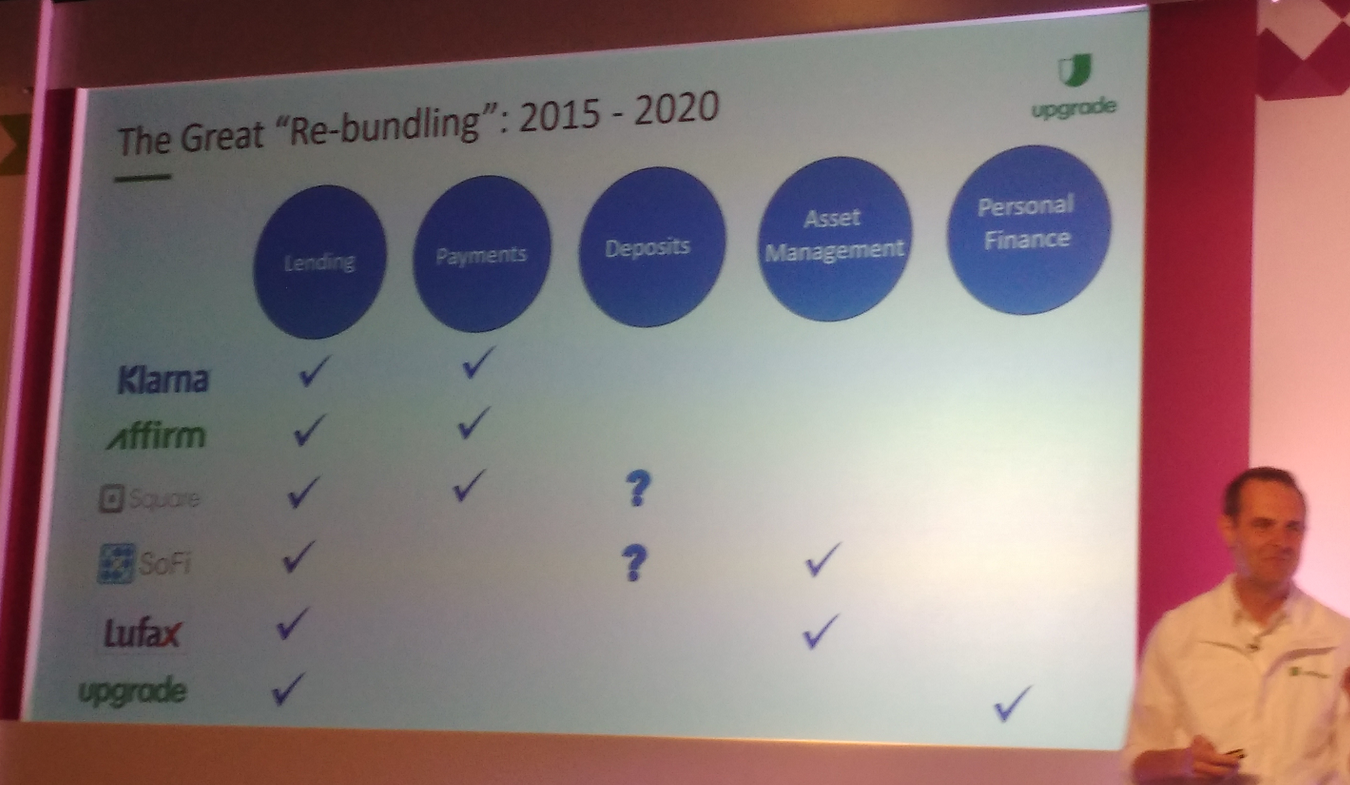 His slide on rebundling examples

There are connections to another development that goes into the same direction and surfaced in several other sessions: More and more fintechs in this space are cooperating to better serve the customer and integrate multiple products into one user experience.

Furthermore there were several sessions around machine learning, artifical intelligence and automated underwriting with a wide range of opinions to what extend processes will be fully automated or whether human intervention or oversight is stll desireable for some specific decisions.

Looking at the scene from a geograhical perspective, many panelists emphasized that there are still a lot of difference between regions. The Americas, Asia or Europe (or even areas inside Europe) show a lot of differences no matter if the specific panel discussed funding, risk, investor yield, regulation or banking. So while many (especially VCs) would love to see fintech innovations that work globally and (if they are consumer faced) reach billions – that is extremly hard to achieve and therefore probably not going to happen in the near future.

This touches several speakers commenting and speculating whether the big tech giants like Amazon, Facebook, Google or Apple have ambitions and plans to offer financial services as they cater to a global audience, and what impact that would have on banks and fintechs. I found some aspects of this interesting, but mostly those discussions are futile because I feel there is such a lot of speculation involved and no real indicators that any of these companies are making steps in that direction. (sorry if there were any hard facts presented, I might have missed them as I did not see all the sessions).

I enjoyed Pitchit, where 8 startups battled for the vote of the jury and the audience. Swiss Sonect won both by hoping to replace ATMs by a platform approach where merchants can become the point where cash is dispensed (this is actually in collaboration with banks as they want to reduce the costs for maintaing ATM infrastructure and not anti-bank as it might sound on first impression).

All sessions at Lendit were recorded and will be made available over the next days here.

Seems like next year Lendit might come to a different location. The exit survey asked attendees to rate how they would like Frankfurt, Berlin, Barcelona vs London again.