Zopa.it has posted a message on their frontpage that the Bank of Italy has revoked the licence to act as a financial intermediary.

EDIT: Speculation – It may have to do with this order of the Bank of Italy, which came into effect on July, 1st limiting the max. allowable interest rates.

I can assure you that the action of Bank of Italy has nothing to do with this order of the Bank of Italy. The document you refer to has quarterly releases and it simply states the average interest rates for various credit products and says that any interest rate higher than 1.5x the average is considered usury (and therefore is illegal).
Zopa has never quoted a single loan even close to usury rate and our average rates are really appreciated by borrowers being in average 9,6 APR against a 15% industry average.
Bank of Italy accuse us of operating banking activity without being a bank while we sustain that we are just intermediating payments between private lenders and borrowers. Accusation is based on the fact that we have a transit lender account, where the money stays for few days, maximum a couple of weeks, before going out in loans. On this account we don’t get any interest and is not part of the assets of Zopa Italia. Nevertheless we had proposed an operative solution to solve the issue and we hope we will get the chance to implement it and reassume the business. I remind you that we got an authorization from Bank of Italy before launching Zopa in Italy.

Thanks to Carlo Vitali, for providing P2P-Banking.com with this information on the status.

*public launch; there was a 2 month period before, that was open by invitation only since Nov. 14th

Eight months* after the launch of Zopa Italy the p2p lending service says it is the fastest growing in Europe (2.79 million Euro = approx 4.075 million US$ cumulative loan volume as of Sept. 3rd).

Rientro Rapido offers the lenders – who have a sudden need of liquidity –  the possibility of recovering their funds instantly by transferring loans made to borrowers to other active lenders in the community.
It is the Zopa market who determines the possibility to transfer a loan to other lenders: in order to withdraw money, there has to be in the market at least one offer from a different lender with compatible  rating, interest rate and duration.
“We are very proud to be the first Social Lending world-wide to launch a service such as RientroRapido, but we have not done this for the sake of establishing a record – Maurizio Sella, CEO of Zopa Italy, declares – . Since we opened our market, several lenders have asked for a tool that would allow them to withdraw rapidly the cash lent-out through Zopa. And with this new service we fulfill their desire. This is the value of Zopa: we are a community that grows, evolves and improves especially thank to the pro-active participation of its members.”

Lenders who sell their loans through Zopa to other lenders pay 0.8% of the loan value plus 15 Euro commission to Zopa. Only loans that have never been late may be sold.

Since June borrowers can select optional payment protection insurance (Rata Protetta) against unemployment, illness or injury. Zopa states that 57% of borrowers bought the insurance (69% in September). The insurance covers the total amount of the loan.

*counted from the public launch on January 16th, 2008, there was a 2 month period before, that was open by invitation only.

In an email newsletter Zopa Italy encouraged its member to spread the word about Zopa to friends and relatives. Zopa says it is for 'a good reason': Zopa Italy pledges to lend $1 on Kiva for each new member that registers at Zopa Italy before January 15th.
Everybody can monitor how much Zopa invested on this lender page at Kiva.

I am sure that Kiva will highly appreciate this promotion, a target audience that is already interested in p2p lending gets introduced to Kiva's concept. But I am not sure if that is a good marketing campaign for Zopa. Should the lenders decide Kiva is an interesting concept they might lend their money at Kiva instead of at Zopa. Maybe Zopa speculates lenders will invest in both. Or Zopa wants the added social angle to increase chances of press coverage.

What do you think? Discuss this at the Zopa forum. 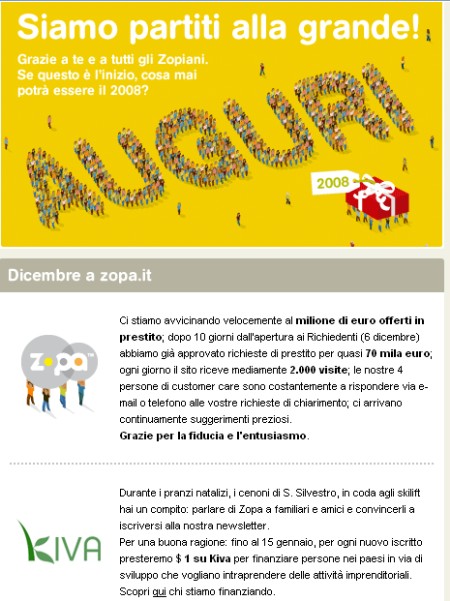 The launch is almost simultaneous to the launch of Zopa Italy.