If you are not totally new to p2p lending then you probably already heard the list of competitive advantages the p2p lending services have over banks: They don’t need branches, they don’t have old legacy infrastructure/software they need to maintain, they need less staff, their processes are faster, …

But how can this advantage be quantified?

On the Lendit 2013 conference Lending Club CEO Renauld Laplanche told the audience about a study conducted by McKinsey that calculated the cost advantage Lending Club has compared to a typical bank. He showed this chart: 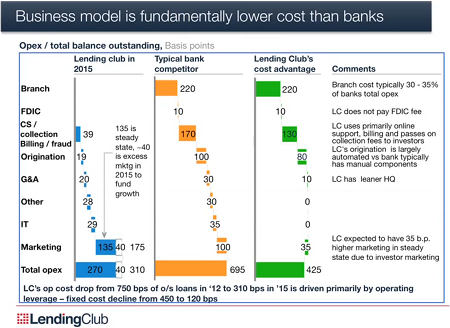 For 2015 the chart projects a cost advantage for Lending Club of over 400 basis points over banks. This is huge. Not surpisingly Lending Club has the biggest advantages by maintaining no branches and in collection and origination. or marketing Lending Club will have higher costs than banks.

Laplanche foresees that more and more banks will actually make use of p2p lending services as platforms to invest or to fund their borrowers to profit from the faster processes and the lower costs. At the conference Laplanche announced the first cooperations with banks and says he expects more to come.

His reasoning is that p2p lending like many other innovations will pass through 3 stages: rejection, adoption and then acceptance by the incumbents. Following this argument, p2p lending could right now be early in the stage of adoption by the industry.

He showed this chart to illustrate how the music industry reacted to disruption by Apple: 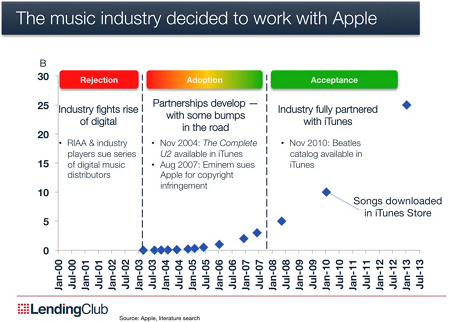 One thought on “Lending Club’s Cost Advantage Over Banks”