In England p2p lending service RateSetter celebrated it’s first year in business anniversary a few days ago. The loan volume matched is close to 9 million GBP, spread out over 2.400 loans.RateSetter has currently about 65.000 members.
RateSetter has a rather unique business model in the p2p lending landscape which builds on anonymously matching demand and supply for two loan “products”: 36-month loans and rolling loans (the total loan volume is spread nearly 50:50 on these products).

RateSetter says that due to the provisions fund mechanism “every single RateSetter lender has received every single penny of capital and interest that they expected.“. The fund is an instrument set up by RateSetter to “reduce the risk for lenders“. Borrowers pay an amount upfront into the Provision Fund based on their creditworthiness.Â  Yesterday RateSetter announced that on Sep. 3oth the team managing the Fund decided not to distribute any money from the Fund back to the lenders, which is possible if the team considers the Fund to be excessivly capitalised.

Borrower representative APRs ranged from 7.6% to 11.6%. 79% of borrowers are homeowners. The two purposes car loans and home improvement loans were given for more than 50% of the loans. In the last six month, interest rates for 36 months loans on RateSetter have been falling, whereas the rates for the rolling loans remained mostly at the same level. 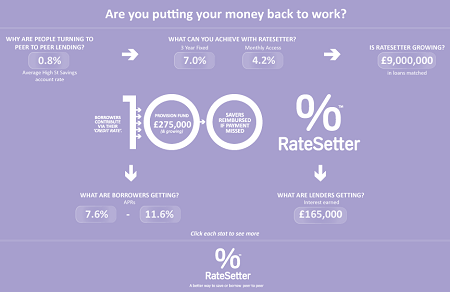 Pretdunion Gains Banking License And Raises Funding
Get Rid of Banks and Replace Them With P2P Lending?