Å½ltÃ½ melÃ³n, the first p2p2 lending service in Slovakia, has successfully completed a Series A investment round and raised its capital to strengthen further development and implementation of strategic plans.

According to information P2P-Banking.com obtained from the Å½ltÃ½ melÃ³n management, the first tranche was little below 1M EUR, with the agreement for additional capital in range of 2M EUR after several milestones will be achieved.

Read an earlier guest post by CEO Roman Feranec about the P2P lending market in Slovakia.
The company plans to expand further into the Czech Republic and other countries in Central and Eastern Europe.

“After being on the Slovak market for two and a half years, we launched our Series A Investment Round in order to raise capital to accelerate growth and further implementation of our strategic plans, particularly in the areas of product portfolio, services for our clients and territorial expansion. We do see the investment as a confirmation of trust in the innovative business model and our company; it also shows that â€‹â€‹peer-to-peer lending is perceived positively not only globally, but also in Slovakia. We really appreciate that Mr. Bremer has joined our team. His extensive experience in the development of financial services throughout our region will greatly assist in our future development,” says Roman Feranec, CEO of Å½ltÃ½ melÃ³n. END_OF_DOCUMENT_TOKEN_TO_BE_REPLACED

Last Thursday I attended the Symvest conference ‘P2P Lending â€“ the New Frontier in Finance‘ in Prague, which was organised by Michael Sonenshine of Symfonie Capital in cooperation with the university of Economics, Prague. Speakers and panelists were mainly from Eastern Europe, though some made the trip from UK, Austria and Italy. The audience consisted predominantly of representatives of Czech finance (banks, investment companies) and students. A main motivation for the conference was to create awareness for p2p lending in general, which is a new phenomenon in the Czech Republic. Sonenshine announced his plans to launch SymCredit, a p2p lending marketplace catering to SMEs in Poland and the Czech Republic.

Matching the audiences experiences some of the content presented was introductory, like ‘What is p2p lending?‘, ‘What are the risks?‘ and a recap of what happened abroad in the past years of development in p2p lending. Regulation was also discussed. Sam Ridler of the P2PFA gave an overview on the UK situation and Danica SebestovÃ¡ of Squire Patton Boggs did a very informative presentation on what the applicable legal environment is in the Czech Republic. Actually the hurdles for launching a p2p lending marketplace there are rather low – there is no specific regulation for p2p lending. While some applicable laws are to be obeyed, summed up it amounts to registering to start trading – at least as long as the loan volume originated is lower than 3 million Euro in the last 12 month.

Speakers pointed out that a hurdle to establish p2p lending is that Czechs are very conservative investors. Backing it up with figures, they explained that Czechs prefer to deposit their money in short term deposits at banks yielding only about 0.15% interest or invest into real estate rather than to look for higher yield investments.

The best part of attending conferences for me is the ability to network with so many people working in p2p lending in one place. I had lunch with Jevgenijs Kazanins, Chief Marketing Officer of Bondora. He wouldn’t disclose which markets Bondora will be entering next. Discussing investor wishes around the new portfolio manager, which does limit selection choices, he said that in Bondora’s view the new API will address this, as it will allow many parameters for selection. He would not disclose when the new API will be available.

I also had a long talk with Siim Maivel, CEO of Investly. He has interesting plans for new offerings. As soon as those are launched, I will write about them here in the blog. With David Bradley-Ward, CEO of Ablrate, I chatted about the scondary market and the loan pipeline. The secondary market will be completely overhauled and the new version launched in April. A small anecdote: He mentioned that it is not uncommon that 200,000 pounds would be spend on legal costs and due diligence of one of the aircraft loans on the platform. He therefore thinks it is porbably safe to call it the most extensive vetting of all p2p lending platforms.

With Martins Sulte I catched up on the last happenings around Mintos. He assured me that he does not expect the talks with the consumer protection body to have any impact on operations. I asked him for the reason for the high interest rates of the Mintos loans, after all these are secured loans. He explained that the Latvian banks are not interested in small loans (<50,000 Euro) backed by real estate, as for them the costs associated with the process are too high. Mintos is receiving many loan applications and so far approve only 3 to 5% of them. Sulte has expansion plans, both in product offering (moving into other secured loan types) and geographically (moving into more markets with Estonia being the next).

Concluding I would like to express my thanks to the organizers for this free to attend conference. It was well organized – they even had simulteneous interpreters translating every panel from Englisch into Czech language.

Visualizations are great to show data that would otherwise just be a long list. I decided to create a map of the p2p lending landscape in Europe. It shows active and discontinued p2p lending services in Europe (including p2p microfinance). Not listed are sites that are in pre-launch stage. All of these marketplaces have been featured earlier in the P2P-Banking.com blog. If you want more information about any of them just enter the name in the search box on the top right of this blog. 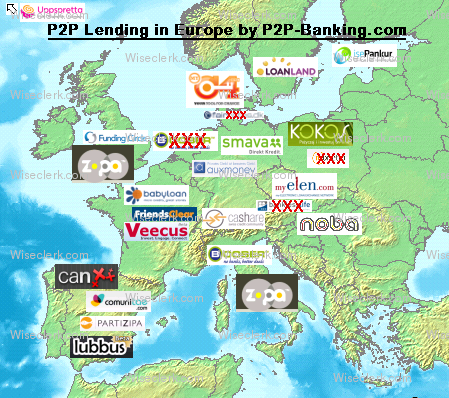 Notice to other websites: You are free to copy and use this map, provided you agree not to alter or resize the image and you will set a link to this article.

Notice to p2p lending sites: If you want to be included in a future version of this map, contact me to learn how.

Last year I lent via Myelen.com to an entrepreneur in Mexico.

In the Myelen p2p microfinance concept the lender signs a contract with the MFI and the MFI takes the default risk of the individual borrowers. The lender carries the market risk that the MFI does not repay the loan. Furthermore at Myelen the MFI covers the currency risk â€“ but for most lenders there is still a currency risk because the loan currency at Myelen is Czech Koruna (CZK).

My 5,000 CZK loan was repaid early by the Mexican MFI since it stopped accepting foreign currency loans to change its legal status. I was repaid 5,115 CZK the total amount plus the accrued interest. The initial 187.50 EUR invested brought back 196 EUR on my account after 7 month – not a bad results.

I did invest in this loan mainly to test the service, since Myelen was previously unknown to me. The experience was good – everything went smoothly. I was notified of the early repayment via email and the money arrived automatically in my bank account.

Note that there were no fees at all for me involved – neither banking fees nor any fees my Myelen.

Currently there are several Mexican loan offers listed on the platform. Offered interest rates range from 4 to 7.5 percent (depending on amount).

Myelen.com is a service allowing lenders to loan money to small entrepreneurs in developing countries. The portal is run

by the Microfinance, a.s. company in Prague (Czech Republic).

Like at Kiva and MYC4 lenders can read profiles of borrowers. Currently Myelen has partnered with 4 MFIs in Mexico. In the Myelen concept the lender signs a contract with the MFI and the MFI takes the default risk of the individual borrowers.

The microfinance institution takes over the credit risks of individual borrowers and lowers them by geographical and sector diversification.

The lender carries the market risk that the MFI does not repay the loan. Furthermore at Myelen the MFI covers the currency risk – but for most lenders there is still a currency risk because the loan currency at Myelen is Czech Koruna (CZK).

The minimum loan amount is 5,000 CZK (approx. 260 US$). The loans are repaid annually (or quarterly for larger amounts). Lenders earn interst. The interest rate varies depending on the MFI and the amount loaned. Typical interest rates are 4 to6 percent (higher for large amounts).

My experience – my first loan via Myelen

I registered yesterday at Myelen.com. The interface ia available in English and Czech. There is also a button to choose German language but clicking that only changes the navigation elements – the text is not translated to German. The sign up form asks for IBAN and SWIFT routing codes for the repayments. Since IBAN account numbers are currently only in use in Europe this limits Myelen to lenders from Europe. 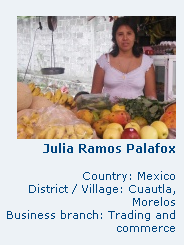 Signing up went smoothly, but I had to wait a few hours for my validation email. Today I selected my first loan to fund. First I was puzzled how to get to the loan selection. To get there the user needs to click on the “Support” link in the upper right. There I could then use drop down menues or browse the individual profiles (currently about 30). I decided to loan 5,000 CZK to Julia Ramos Palafox who has a fruit and vegetables stand in Mexico. The MFI – CrediComÃºn listed a 5% interest rate. I was given the choice of selecting an annual or quartely repayment. One further option is to give an interest free loan (like at Kiva). The next step is to accept the loan contract. The loan contract is now sent via email to the MFI which signs it. END_OF_DOCUMENT_TOKEN_TO_BE_REPLACED