I use Seedrs* to invest into the equity of British startups since 2013. I have written about several aspects and my experience in the past here on the blog. Overall my results are very satisfying. My annualized return (IRR) is currently 23.4%. As I am not a UK resident I forego the tax benefits of EIS/SEIS which according to the Seedrs*Â  dashboard would have pushed my IRR to 28.1% The one caveat is that some of the profits are paper gains, yet to be realized. But I cashed out on some substantial gains already, especially Revolut and Landbay shares via the Seedrs*Â  secondary market. I invested mostly (81%) in fintech startups – for those interested in the details here is a screenshot of my recent portfolio.

Since 2017 Seedrs* provides a secondary market allowing investors to sell shares to each other. Depending on how in demand the traded startups are, shares sell out within minutes/seconds or the market opening (e.g. Revolut shares in 2019). The secondary market opens only for one week a month, a measure Seedrs has taken to heighten liquidity by concentrating demand and supply.

Up to now prices for the traded part were fix and changed seldom determined by ‘fair value‘ settings. Simplified in most cases the value of shares was set based on the valuation the startup raised capital on its last round. The price changed only with a new round and that usually happend only once every 1-2 years (see the picture, the curves are in most cases straight lines as there are only two datapoints). Furthermore the valuation of the startup is set (controlled) by the startup itself (unless there is a large professional investor like a VC participating in the round). I don’t want to do an excursion into the possible methods of startup valuation as that would make a rather long article, but rather say that some valuations of Seedrs pitches seemed rather inflated to me.

As early as Dec. 2018 Seedrs announced that it intended to enable variable pricing on the secondary market trading.

Since yesterday evening variable pricing is now live on the Seedrs* secondary market. Sellers can list their shares with discounts of up to -30% and premiums of up to 30%. Unfortunately Seedrs only allows steps of 10% and not granular 1% prices increases.

This will allow me some interesting experiments with the pricing feature

So far I mainly used the Seedrs secondary market to

b) sell shares to realize profits

The investment time frame for this has been multiple years. With flexible pricing there might be chances for some trading opportunities on shorter time spans.

In the early times of the secondary markets on Bondora* and Mintos* I did a lot of active trading. My learning was that there was a time span of several months when I could trade very profitable due to the fact that these secondary markets where very new, everbody had to learn which trading strategies worked best and there was a big mismatch between supply and demand. After a few month the opportunity vanished as traders got more professional and margins diminished. And the effort had to be worth my time invested. But those first months in a new market taught me a lot about market dynamics and market psychology, brought good profits and I had a lot of fun.

Repeating that on the Seedrs secondary market will not be easy. First of all the transaction fees on Seedrs secondary market are high. Second trading is not real time (it takes days for transactions to settle). And third the demand concentrates on a few startups that investors deem attractive while there is little buyer demand for all the other startups. On the other hand demand for startup shares is much more driven by expectations and emotions than on the p2p lending markets, where there are hard figures like YTM (yield to maturity) to gauge available parts on offer against each other.

I sold more than 95% of the Revolut shares I held in May 2020 at the fixed fair value. There were a lot (about 2M GBP) of Revolut shares on offer in June and July trading cycles which went unsold. I will watch closely whether any offers at -30% will show up next trading cycle. At that price point I might be tempted to buy them again. At the time of this writing there is one lot on offer at -30%, three at -20% and multiple at -10%.

What’s your take on the introduction of variable pricing on the Seedrs secondary market. Share your opinion in the comments.

The table lists the loan originations of p2p lending marketplaces for last month. Mintos* leads ahead of Finbee* and Ratesetter*. The total volume for the reported marketplaces in the table adds up to 236 million Euro. I track the development of p2p lending volumes for many markets. Since I already have most of the data on file, I can publish statistics on the monthly loan originations for selected p2p lending platforms. This month I added Kviku*. I delisted Smartika as it does not seem to have originated any new loans for 5 month now. 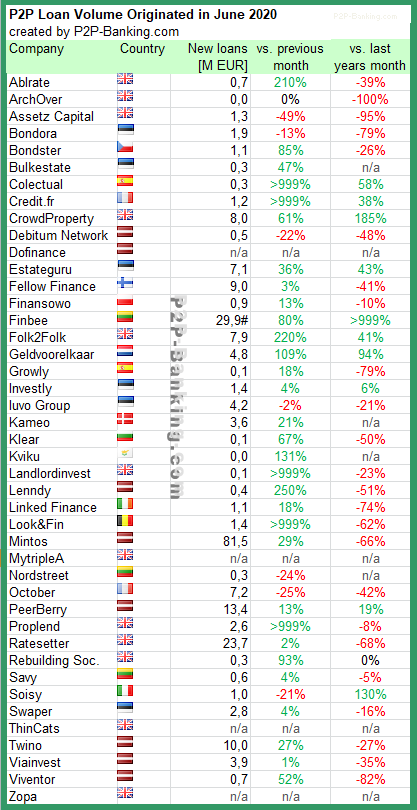